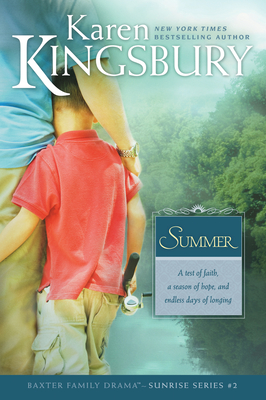 This is book number 2 in the Baxter Family Drama: Sunrise series.

Book 2 in the bestselling 4-book Christian fiction series that has sold over 1.3 million copies

A story about God's unending faithfulness and the trials and triumphs of this one unforgettable summer, from Karen Kingsbury, the #1 New York Times bestselling author of "heart-tugging and emotional" (Romantic Times) life-changing fiction.

A New Beginning
Hollywood actor Dayne Matthews and Katy Hart are married and living in Bloomington, Indiana, where Dayne has found a solution to his on-camera love scenes--he wants Katy to star in his next film. Katy wins the part and is cast opposite her superstar husband. The story of a small town girl's dream-come-true is too much for the press to resist, and in an effort to appease them, the couple agrees to a 12-episode reality show. It seems like the perfect compromise, but by the time they finish filming the movie, they feel cracks around the edges of their marriage. Now they face an uncertain future, and possibly the end of everything that truly matters to them.

An Unforgettable Summer
The Baxter family learns that Ashley and Kari are both pregnant, but an ultrasound reveals that something is wrong with one of the babies. As the summer progresses, the sisters pray for a miracle while trying to face the unthinkable. It's in this trying season that they must all learn the lesson God has been trying to teach them--He is still in control, and He will be with them regardless of the outcome.

An Emotional Farewell
The Flanigans continue to draw closer to their only daughter, yet Bailey struggles to find her way amidst the turmoil of adolescence. She has always made good decisions, but she wants to experience more of life. Her friendship with Cody Coleman--the young boarder staying with the Flanigans--continues to blossom in this summer after his graduation. But when Cody decides to enlist in the Army, he'll have to say goodbye to the family he's come to love and the girl he'll never forget.

The Sunrise series is the third installment in the continuing Baxter Family Drama from America's number-one inspirational novelist, Karen Kingsbury. Revisit the Baxter family in all their life-changing events, or share the series with someone who hasn't discovered it yet.