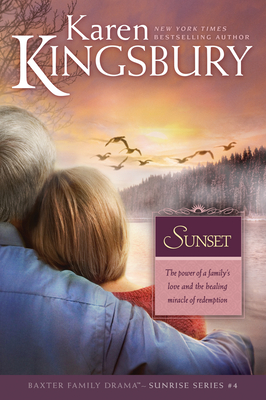 This is book number 4 in the Baxter Family Drama: Sunrise series.

Book 4 in the bestselling 4-book Christian fiction series that has sold over 1.3 million copies

A story about God's unending faithfulness, the power of family love, and the healing miracle of redemption, from Karen Kingsbury, the #1 New York Times bestselling author of "heart-tugging and emotional" (Romantic Times) life-changing fiction.

A New Chapter
With the demands of Hollywood life behind them for now, Dayne and Katy Matthews continue to adjust to life in Bloomington as they look forward to a new chapter together--expanding their family. Meanwhile, the entire CKT staff is busy preparing for the first production in Dayne and Katy's theater.

A Time of Uncertainty
The Flanigans rally to support Bailey and Connor as they try out for lead roles in the musical, but then the family receives tragic news that weighs heavily on everyone's mind. At the same time, Jim Flanigan faces a decision that could drastically change his family's life.

A Beautiful Beginning
As John Baxter prepares for his marriage to Elaine Denning, one of the Baxters enters the most trying season of all. Will a time of renewed love and hope be strong enough to establish the sacred ground of marriage and chart a course for the future? And when the time comes to finally sell the beloved Baxter house, memories of times gone by meet with the changes of today, proving that only the support of faith and family can take a person into the sunset years of life.

The Sunrise series is the third installment in the continuing Baxter Family Drama from America's number-one inspirational novelist, Karen Kingsbury. Revisit the Baxter family in all their life-changing events, or share the series with someone who hasn't discovered it yet.