Zero to Hero: From Bullied Kid to Warrior (Hardcover) 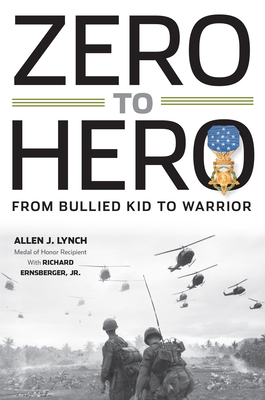 This is the life story of Al Lynch in his own words -- an American hero who is now one of only 72 living Medal of Honor recipients. This is the story of a happy boy growing up in Chicagoland's South Side industrial neighborhoods. His early happiness was almost eradicated by several years of intense bullying, though he found ways to overcome that experience. This is the story of an aimless young man whose prospects of following in his father's foot-steps as a blue-collar tradesman were cut short by the Vietnam War and by his personal search for something greater than himself. This is the story of a man whose meandering military career, and his life up to that point, came into sharp focus when, in a deadly ﬁreﬁght in Vietnam, he rushed to rescue three wounded troopers in no man's land. He was urged to leave the wounded and return to a safe position. But Lynch refused to retreat in order to stay with his troopers despite having every reason to believe he would die that afternoon. Because of these actions, he is a hero.

This is also the story of the many troubling consequences of surviving battles while others died, sometimes tragically due to friendly ﬁ re or the random violence of an aimless war. This is the story of a man whose sense of honesty and independence has been honed over a lifetime of mistakes and victories toward always doing the right thing, no matter the cost. And this is the story of a man who learned that independence can be a selﬁsh burden, and that life is not only about helping others, but allowing others to help him. So this is a story of a man who overcame the dragons of PTSD with the help of his family and friends, and by being honest with himself. Al Lynch has written a story that speaks to all of us -- one doesn't have to be a war hero to be wounded by life. By the writing of Zero to Hero, Al shows us the stuff of which heroes are made.

Allen J. Lynch is a native of Illinois, a combat veteran of the Vietnam War, and a Medal of Honor recipient, with a lifelong career of devoted service to U.S military veterans. Richard Ernsberger, Jr., a 20-year veteran Newsweek reporter and editor, co-authored The General: William Levine, Citizen Soldier and Liberator.