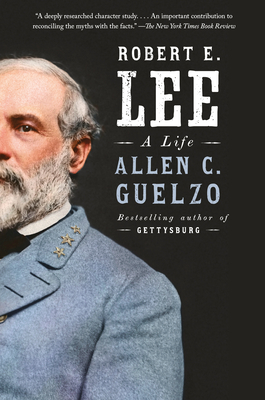 A WALL STREET JOURNAL BEST BOOK OF THE YEAR • From the award-winning historian and best-selling author of Gettysburg comes the definitive biography of Robert E. Lee. An intimate look at the Confederate general in all his complexity—his hypocrisy and courage, his inner turmoil and outward calm, his disloyalty and his honor.

"An important contribution to reconciling the myths with the facts." —New York Times Book Review

Robert E. Lee is one of the most confounding figures in American history. Lee betrayed his nation in order to defend his home state and uphold the slave system he claimed to oppose. He was a traitor to the country he swore to serve as an Army officer, and yet he was admired even by his enemies for his composure and leadership. He considered slavery immoral, but benefited from inherited slaves and fought to defend the institution. And behind his genteel demeanor and perfectionism lurked the insecurities of a man haunted by the legacy of a father who stained the family name by declaring bankruptcy and who disappeared when Robert was just six years old.

In Robert E. Lee, the award-winning historian Allen Guelzo has written the definitive biography of the general, following him from his refined upbringing in Virginia high society, to his long career in the U.S. Army, his agonized decision to side with Virginia when it seceded from the Union, and his leadership during the Civil War. Above all, Guelzo captures Robert E. Lee in all his complexity--his hypocrisy and courage, his outward calm and inner turmoil, his honor and his disloyalty.

ALLEN C. GUELZO is Senior Research Scholar at the Council of Humanities at Princeton University. He is the author of several books about the Civil War and early nineteenth-century American history. He has been the recipient of the Lincoln Prize three times, the Guggenheim-Lehrman Prize for Military History, and many other honors. He lives in Pennsylvania.

A Wall Street Journal Best Book of the Year

"Allen C. Guelzo, an eminent Civil War historian, has now published exactly what the nation needs as it reappraises important historical figures who lived in challenging times with assumptions radically unlike today’s. Robert E. Lee: A Life, Guelzo’s scrupulously measured assessment, is mercifully free of the grandstanding by which many moralists nowadays celebrate themselves by indignantly deploring the shortcomings of those whose behavior offends current sensibilities. But by casting a cool eye on Lee, Guelzo allows facts to validate today’s removals of Lee’s name and statues from public buildings and places... Guelzo’s biography is necessary."
—George F. Will, Washington Post

"Robert E. Lee: A Life injects learning, subtlety, and even compassion into a debate that has more often been characterized by ignorance, simple-mindedness, and sanctimony.”
—Andrew Ferguson, Washington Beacon

"Allen C. Guelzo’s timely biography expertly scrubs off 150 years of political and cultural patina accumulated since the renowned general’s passing to reveal a tragic humanity... Guelzo’s formal yet enjoyable writing style evokes the period without getting lost in it. His presentation achieves relevance as America is once again riven with regional, cultural and political hostility."
—Douglass K. Daniel, Associated Press

"It is impossible to do justice to Guelzo’s splendid work. He has done what we ask biographers to do: provide an incisive look at a complex man, neither secular saint nor moral monster. Of course, complexity is the human condition. Thanks to Allen Guelzo for providing the definitive look at the life of a complex man."
—Mackubin Thomas Owens, National Review

"Allen C. Guelzo not only covers new ground with the incredible depth and breadth of his research, he does an exemplary job of showing how history should be written, keenly aware of historical context, contemporary values, and the space between them... Reading more histories like these would be a good start to dealing with our country’s racist past and the ways it permeates into the present day."
—Marissa Moss, New York Journal of Books

“One of America’s greatest Lincoln scholars, Allen Guelzo has written the definitive biography of Robert E. Lee for our time.”
—Michael Lind, author of What Lincoln Believed

“Allen Guelzo confirms his place in the top rank of Civil War historians with his masterly biography of Robert E. Lee. Well-researched, well-written and captivating, it will stand as the definitive single-volume life for decades to come. Guelzo’s judicious comments on Lee’s ‘crime and glory’ might be a good place for America to start healing her present-day wounds.”
—Andrew Roberts, author of Churchill, Walking with Destiny

“At once bold and balanced, Allen Guelzo's portrait is one of a man who could be alone in a crowd, inspiring to millions, and yet forever isolated and contained by his own personality and self-imposed martyrdom. He was dominant facing enemy legions in the field, and yet passive to timidity with his own government leaders. Backed by impressive research, honed on mature and even-handed judgment, and presented with the eloquence of a master craftsman, Robert E. Lee, A Life will please many, anger a few, and inform everyone who takes it up."
—William C. Davis, author of Crucible of Command:  Ulysses S. Grant and Robert E. Lee, the War they Fought, the Peace they Forged.

“Allen C. Guelzo has written exactly what the nation urgently needs right now—an example of mature thinking about complex, flawed people who took difficult actions in contexts not of their making or choosing. In today’s blizzard of facile, overheated, and grandstanding judgments about the past, this unsentimental biography illustrates the intellectual responsibility that the present owes to the past.”
—George F. Will