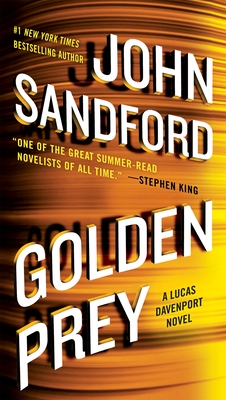 This is book number 27 in the A Prey Novel series.

Lucas Davenport’s first case as a U.S. Marshal sends him into uncharted territory in the thrilling new novel in the #1 New York Times-bestselling series.

The man was smart and he didn’t mind killing people. Welcome to the big leagues, Davenport.

Thanks to some very influential people whose lives he saved, Lucas is no longer working for the Minnesota Bureau of Criminal Apprehension, but for the U.S. Marshals Service, and with unusual scope. He gets to pick his own cases, whatever they are, wherever they lead him.

And where they’ve led him this time is into real trouble. A Biloxi, Mississippi, drug-cartel counting house gets robbed, and suitcases full of cash disappear, leaving behind five bodies, including that of a six-year-old girl. Davenport takes the case, which quickly spirals out of control, as cartel assassins, including a torturer known as the “Queen of home-improvement tools” compete with Davenport to find the Dixie Hicks shooters who knocked over the counting house. Things get ugly real fast, and neither the cartel killers nor the holdup men give a damn about whose lives Davenport might have saved; to them, he’s just another large target.

Filled with his trademark razor-sharp plotting and some of the best characters in suspense fiction, Golden Prey is further reason why “Sandford has always been at the top of any list of great mystery writers” (The Huffington Post).

John Sandford is the pseudonym for the Pulitzer Prize–winning journalist John Camp. He is the author of twenty-seven Prey novels; four Kidd novels; nine Virgil Flowers novels; three YA novels coauthored with his wife, Michele Cook; and three other books, most recently Saturn Run.

“The best Lucas Davenport story so far. The man has a fine touch for outlaws.”—Stephen King

“Sandford’s trademark blend of rough humor and deadly action keeps the pages turning until the smile-inducing wrap-up, which reveals the fates of a number of his quirky, memorable characters.”—Publishers Weekly

“Buckle up, grab a cold drink & settle in for another splendid entry in a stellar series.”—Richmond Times-Dispatch

Praise for the Prey novels of John Sandford

“It appears there is no limit to John Sandford’s ability to keep new breath and blood flowing into his Lucas Davenport series. This is a series you must be reading if you are not already.”—Bookreporter.com

“If you haven’t read Sandford yet, you have been missing one of the great summer-read novelists of all time.”—Stephen King