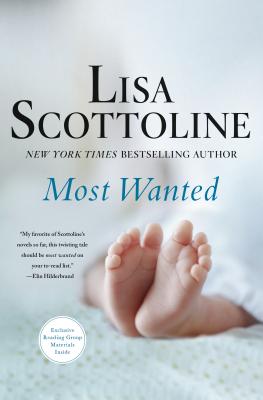 By Lisa Scottoline
$27.99
Email or call for price.

“An infertile couple decides to use a sperm donor to create the perfect family they have always wanted. When the wife sees a picture of a man who looks very similar to their donor on the evening news, the story is set in motion. Could their donor be a serial killer? Christine will stop at nothing to find out who the biological father is, even if it means the end of her marriage. This latest novel of suspense from the bestselling Scottoline is fast-paced and will keep readers guessing until the end!”
— Sarah Harmuth Letke (W), Redbery Books, Cable, WI

“Spellbinding. Another tour de force from Scottoline. It drew me in, in a single breath.”–Mary Kubica, bestselling author of The Good Girl

Christine Nilsson and her husband, Marcus, are desperate for a baby. Unable to conceive, they find themselves facing a difficult choice they had never anticipated. After many appointments with specialists, endless research, and countless conversations, they make the decision to use a donor.

Two months pass, and Christine is happily pregnant. But one day, she is shocked to see a young blond man on the TV news being arrested for a series of brutal murders—and the blond man bears an undeniable and uncanny resemblance to her donor.

Delving deeper to uncover the truth, Christine must confront a terrifying reality and face her worst fears. Riveting and fast-paced with the depth of emotionality that has garnered Lisa Scottoline legions of fans, the New York Times bestseller, Most Wanted, poses an ethical and moral dilemma: What would you do if the biological father of your unborn child was a killer?

Lisa Scottoline is the New York Times bestselling author of over thirty novels including Look Again, Lady Killer, Think Twice, Save Me and Everywhere That Mary Went. She also writes a weekly column, “Chick Wit,” with her daughter Francesca Serritella, for The Philadelphia Inquirer. The columns have been collected in seven volumes, including Why My Third Husband Will Be a Dog and My Nest Isn’t Empty, It Just Has More Closet Space. Scottoline has won an Edgar® Award and Cosmopolitan magazine’s “Fun Fearless Fiction” Award, and she served as the president of Mystery Writers of America. She teaches a course on justice and fiction at the University of Pennsylvania Law School, her alma mater. She lives in the Philadelphia area.

"In novel after novel, Lisa Scottoline has proven herself a master of stories that combine familial love — especially that of mothers for their children — with nail-biting stories of spirited everywomen bent on finding the truth. Her new novel, Most Wanted, demonstrates again her skill with this kind of domestic suspense tale." – The Washington Post

"This is a potboiler of a book, crammed full of agonizing choices confronting appealing, relatable characters. Scottoline has penned more hardboiled tales, but never one as heartfelt and emotionally raw, raising her craft to the level of Judith Guest and Alice Hoffman. Most Wanted is a great thriller and a gut-wrenching foray into visceral angst that is not to be missed." – The Providence Journal

A suburban crime tale told with Scottoline’s penchant for humor and soul-baring characterization."
– Booklist on Most Wanted

"A page-turner that will satisfy." – Library Journal on Most Wanted

"A Connecticut teacher’s long-sought and hard-fought pregnancy turns into a nightmare when Scottoline unleashes one of her irresistible hooks on her." – Kirkus Reviews on Most Wanted

“Scottoline knows how to keep readers in her grip.” –The New York Times Book Review

"A virtuoso of suspense, fast action, and intricate plot." —The Washington Post

"Bestseller Scottoline casts an unflinching eye on the damaged world of sociopaths in this exciting thriller." —Publishers Weekly (starred review)

“Scottoline is a powerhouse.” –David Baldacci

"Scottoline has plenty of tricks up her sleeve." —Booklist (starred review)

“Scottoline writes riveting thrillers that keep me up all night, with plots that twist and turn.” –Harlan Coben

“Lisa Scottoline is one of the very best writers at work today.” —Michael Connelly

“Scottoline is brilliant at getting the story moving right from the start. She also has a rare talent for creating and defining her characters. Readers are sucked into this story and remain fascinated with everything spelled out on the pages." —The Huffington Post