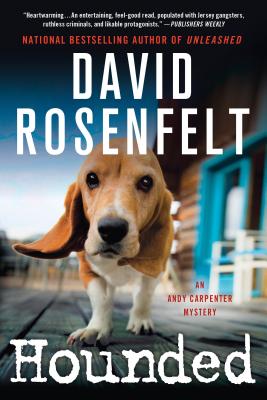 By David Rosenfelt
$17.99
Call for price

This is book number 12 in the An Andy Carpenter Novel series.

Andy Carpenter isn't sure what to think when he gets a mysterious phone call from a good friend, policeman Pete Stanton, asking him to drop everything, drive to an unfamiliar address, and bring his girlfriend, Laurie Collins. He certainly isn't expecting to show up at a crime scene. But that's exactly where he arrives—at the house where Pete has just discovered the body of ex-convict Danny Diza. Upstairs are Danny's now orphaned eight-year-old son and basset hound. And that, Andy discovers, is why he and Laurie were called to the scene—Pete wants them to take care of the boy and the dog so they won't get thrown into the "system." This is already asking a lot, but soon Pete needs another big favor from Andy. Pete himself has come under suspicion for Danny's murder, and he needs defense attorney Andy to represent him…and to find out what really happened in Danny's house that day.

David Rosenfelt has done it again. Told with his characteristic humor and wit, Hounded is at once a heartfelt story about family and a page-turning legal thriller.

“Hounded [is] great summer entertainment, a page-turning mystery with a lot of good laughs along the way.” —Portland Press Herald

“Terrific…How does Rosenfelt manage to construct such clever and complex plots, tie them all together, make you love Andy more with every novel, and bombard you with non-stop humor, all at the same time? Only Rosenfelt can pull off that kind of quadruple-play. His is an absolutely unique mystery/comedy talent.”—Examiner.com

“[A] character-driven pleasure…Rosenfelt has had plenty of time to hone his protagonist’s wiseass humor and refine his oddball cast…[An] entertaining caper.”—Booklist

Praise for Leader of the Pack

“A fun mystery…surprising enough that I gasped in public…The ending is deeply satisfying.”—[New Jersey] Star Ledger

“Entertaining…Well-worked action scenes and fiery courtroom clashes [add] up to a good-natured read that isn’t quite as easygoing as it seems. Like its hero.”—Booklist