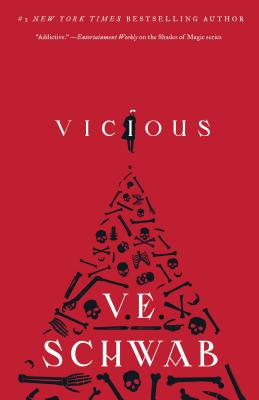 This is book number 1 in the Villains series.

A repackage of New York Times bestseller V.E. Schwab's Vicious, a masterful tale of ambition, jealousy, and superpowers which will include:

*A new cover by Will Staehle, cover artist of the iconic Shades of Magic trilogy covers
*Schwab's Tor.com short story set within the Vicious universe, "Warm Up"
*A teaser for the upcoming sequel, Vengeful

Victor and Eli started out as college roommates—brilliant, arrogant, lonely boys who recognized the same sharpness and ambition in each other. In their senior year, a shared research interest in adrenaline, near-death experiences, and seemingly supernatural events reveals an intriguing possibility: that under the right conditions, someone could develop extraordinary abilities. But when their thesis moves from the academic to the experimental, things go horribly wrong.

Ten years later, Victor breaks out of prison, determined to catch up to his old friend (now foe), aided by a young girl whose reserved nature obscures a stunning ability. Meanwhile, Eli is on a mission to eradicate every other super-powered person that he can find—aside from his sidekick, an enigmatic woman with an unbreakable will. Armed with terrible power on both sides, driven by the memory of betrayal and loss, the archnemeses have set a course for revenge—but who will be left alive at the end?

In Vicious, V. E. Schwab brings to life a gritty comic-book-style world in vivid prose: a world where gaining superpowers doesn't automatically lead to heroism, and a time when allegiances are called into question.

"A dynamic and original twist on what it means to be a hero and a villain. A killer from page one…highly recommended!" —Jonathan Maberry, New York Times bestselling author of Marvel Universe vs The Avengers and Patient Zero

VICTORIA “V.E.” SCHWAB is the #1 New York Times bestselling author of more than a dozen books, including the acclaimed novel The Invisible Life of Addie LaRue, the Shades of Magic series, Villains series, This Savage Song, and Our Dark Duet. Her work has received critical acclaim, been featured in the New York Times, Entertainment Weekly, Washington Post and more, translated into more than a dozen languages, and has been optioned for television and film. When she’s not haunting Paris streets or trudging up English hillsides, she lives in Edinburgh, Scotland and is usually tucked in the corner of a coffee shop, dreaming up monsters.

“Schwab's characters feel vital and real, never reduced to simple archetypes... In a genre that tends toward the flippant or pretentious, this is a rare superhero novel as epic and gripping as any classic comic. Schwab's tale of betrayal, self-hatred, and survival will resonate with superhero fans as well as readers who have never heard of Charles Xavier or Victor von Doom.” —Publishers Weekly, starred review

“A fun, morally-flexible revenge tale...Vicious methodically ratchets up the tension as Victor and Eli circle each other for the inevitable kill.” —Daniel H. Wilson, NYT bestselling author of Robopocalypse

“Schwab gathers all the superhero/supervillain tropes and turns them on their sundry heads.... I could not put it down.” —F. Paul Wilson, New York Times bestselling author of the Repairman Jack series

“Vicious is dark and intricate and daring, twisting back and forth through time and morality and life and death until you can't turn the pages fast enough. I loved it.” —Dan Wells, author of I Am Not a Serial Killer

“An epic collision of super-powered nemeses. The writing and storycraft is Schwab's own superpower as this tale leaps off the page in all its dark, four-color comic-book glory.” —Chuck Wendig, author of Blackbirds

“Utterly brilliant. Schwab takes the notion of superhero fiction and bashes it on its head...prepare to be thoroughly entertained.” —Jackie Kessler, coauthor of Black and White

“A noirish cross between the X-Men and 'The Count of Monte Cristo.' You won't be able to stop turning the pages.” —Alex Bledsoe, author of The Hum and the Shiver