Lord of the Fly Fest (Hardcover) 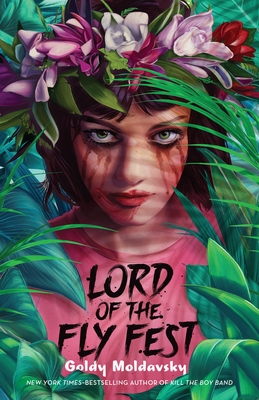 Influencers trapped on a deserted island with a murder suspect in their midst—what could possibly go wrong? Fans of White Lotus will love this hilarious and gripping take on Lord of the Flies from New York Times bestselling author Goldy Moldavsky.

Rafi Francisco needs a splashy case to put her true-crime podcast on the map. Her plan? A murder investigation, of course. She’s heading to Fly Fest, an exclusive music festival on a Caribbean island, to interview River Stone, the pop star who rocketed to fame after his girlfriend’s mysterious disappearance. And her interview is going to expose him as the killer she’s sure he is.

But when Rafi—and hordes of influencers—arrive at Fly Fest, the dreamy Caribbean getaway they were promised turns out to be a nightmare. Soon, Rafi is fighting for her life against power-hungry beauty gurus and spotty WiFi. And as the festival from hell continues with no end in sight, and Rafi finds herself growing closer to River, she begins to discover that his secrets have much bigger consequences than she ever imagined.

Goldy Moldavsky was born in Lima, Peru, and grew up in Brooklyn, New York, where she lives with her family. She is the New York Times–bestselling author of Kill the Boy Band and No Good Deed. Some of her influences include Buffy the Vampire Slayer, the esteemed works of John Irving, and the Mexican telenovelas she grew up watching with her mother.

"...it's the outlandish influencer cast and their Lord of the Flies–inspired antics that buoy this swiftly paced, darkly funny indictment of internet culture." - Publisher's Weekly