Stuff They Don't Want You to Know (Hardcover) 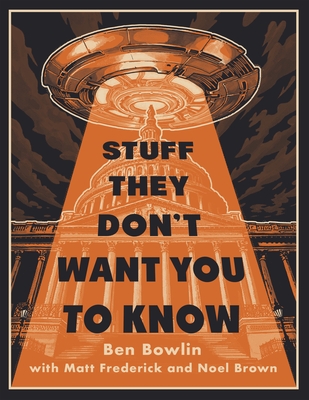 “Interesting...Bowlin's calmly rational approach to the subject of conspiracy theories shows the importance of logic and evidence.”—Booklist

"A page-turning book to give to someone who believes in pizza pedophilia or that the Illuminati rule the world."—Kirkus Reviews

In times of chaos and uncertainty, when trust is low and economic disparity is high, when political institutions are crumbling and cultural animosities are building, conspiracy theories find fertile ground. Many are wild, most are untrue, a few are hard to ignore, but all of them share one vital trait: there’s a seed of truth at their center. That seed carries the sordid, conspiracy-riddled history of our institutions and corporations woven into its DNA.

Ben Bowlin, Matt Frederick, and Noel Brown host the popular iHeart Media podcast, Stuff They Don’t Want You To Know. They are experts at exploring, explaining, and interrogating today’s emergent conspiracies—from chem trails and biological testing to the secrets of lobbying and the indisputable evidence of UFOs.

Written in a smart, witty, and conversational style, elevated with amazing illustrations, Stuff They Don’t Want You to Know is a vital book in understanding the nature of conspiracy and using truth as a powerful weapon against ignorance, misinformation, and lies.

Ben Bowlin is the co-host of iHeart Media's hit podcast Stuff They Don't Want You to Know. He lives in Atlanta, Georgia.

Matt Frederick is the co-host of iHeart Media's hit podcast Stuff They Don't Want You to Know. He lives in Atlanta, Georgia.

Noel Brown is the co-host of iHeart Media's hit podcast Stuff They Don't Want You to Know. He lives in Atlanta, Georgia.