Her Honor: My Life on the Bench...What Works, What's Broken, and How to Change It (Paperback) 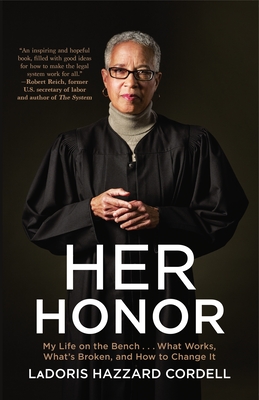 In Her Honor, Judge LaDoris Hazzard Cordell provides a rare and thought-provoking insider account of our legal system, sharing vivid stories of the cases that came through her courtroom and revealing the strengths, flaws, and much-needed changes within our courts.

Judge Cordell, the first African American woman to sit on the Superior Court of Northern California, knows firsthand how prejudice has permeated our legal system. And yet, she believes in the system. From ending school segregation to legalizing same-sex marriage, its progress relies on legal professionals and jurors who strive to make the imperfect system as fair as possible.

Her Honor is an entertaining and provocative look into the hearts and minds of judges. Cordell takes you into her chambers where she haggles with prosecutors and defense attorneys and into the courtroom during jury selection and sentencing hearings. She uses real cases to highlight how judges make difficult decisions, all the while facing outside pressures from the media, law enforcement, lobbyists, and the friends and families of the people involved.

Cordell’s candid account of her years on the bench shines light on all areas of the legal system, from juvenile delinquency and the shift from rehabilitation to punishment, along with the racial biases therein, to the thousands of plea bargains that allow our overburdened courts to stay afloat—as long as innocent people are willing to plead guilty. There are tales of marriages and divorces, adoptions, and contested wills—some humorous, others heartwarming, still others deeply troubling.

Her Honor is for anyone who’s had the good or bad fortune to stand before a judge or sit on a jury. It is for true-crime junkies and people who vote in judicial elections. Most importantly, this is a book for anyone who wants to know what our legal system, for better or worse, means to the everyday lives of all Americans.

Judge LaDoris Hazzard Cordell is a legal commentator and police reform advocate, who is a frequent commentator on news outlets including NPR, CNN, and MSNBC. A graduate of Stanford Law School, she became the first African American woman jurist in Northern California, a position she held from 1982 to 2001. Prior to her time on the bench, she was the first lawyer to open a private practice in East Palo Alto, CA, a low-income community of color, and was an Assistant Dean of Stanford Law School where she implemented a highly successful minority admissions program. Following her retirement from the bench, she was a Vice Provost at Stanford University and, in 2010, was appointed the Independent Police Auditor for the City of San Jose. Judge Cordell's public service record spans decades, during which time she has overseen commissions that investigated violence and mental health care in the jail system, as well as accounts of racism in the San Francisco police department. She has received numerous awards, including Silicon Valley NAACP’s William E.B. Dubois Award, the Iola Williams Public Service Award, the National Council of Negro Women’s Public Service Award, the Social Justice Award from Legal Advocates for Children & Youth, and the Rose Bird Memorial Award from the California Women Lawyers. Judge Cordell founded the African American Donor Task Force to increase black participation in the national bone marrow registry. She is the co-founder of the African American Composer Initiative and CA Parks for All. An artist and pianist, she resides in California with her partner and is the proud mother of two daughters.

"Enriched by intriguing case studies and Cordell’s no-nonsense manner, this is an accessible peek into the halls of justice."
—Publishers Weekly

"One of the year's must-read works of nonfiction."
—Bustle, "The Most Anticipated Books Of October 2021"

"In her memoir Her Honor, the principled and uncommon retired California Superior Court Judge LaDoris H. Cordell offers an unvarnished peek into the mind of a jurist as she adjudicated within a legal system that is politically, systemically, and historically flawed. Narrated with candor and humor, and rich with tales from the bench and inside her chambers, Cordell unpacks her efforts to do both what is right and what is just, and to critique and improve upon a system even as she revered it. Revealing, engrossing, funny, and ultimately instructive, the memoir concludes with ten recommendations for judicial reform that all jurisdictions would do well to take up. A must-read about the ability of one person to stand up for justice both within the system and outside of it."
—Julie Lythcott-Haims, New York Times bestselling author

"LaDoris Cordell was the first Black woman judge in Northern California. In this remarkable book – part memoir, part insistence on reform, she tells it exactly how it is. Alternately searing and heartwarming, this is a book that will at one moment will make you shudder at the profoundly sad stories that find their way into our legal system, and tear up at others. This is one great read, and not to be missed."
—Barry Friedman, Jacob D. Fuchsberg Professor of Law, NYU School of Law

"Beautifully written and riveting from start to finish, this remarkable memoir by one of our nation’s most pathbreaking jurists seamlessly interweaves vivid and often gut-wrenching courtroom scenes with fascinating legal history and candid personal reflection to provide a unique glimpse inside the process of judicial decision-making. A brave, profound and affecting book that combines wisdom, candor, wit and humanity in equal measure, Her Honor is a sterling embodiment of the meaning of judicial independence that should be required reading for law students and anyone interested in our system of justice."
—Kathleen M. Sullivan, Former Dean, Stanford Law School

"With candor and insight, Judge LaDoris Cordell puts a human face on the judges who make life-changing decisions on a daily basis. She takes readers inside the courtroom, presenting stories of the people whose lives have been altered, for better or worse, by our laws and the professionals who enact them. This is an inspiring and hopeful book, filled with good ideas for how to make the legal system work for all."
—Robert Reich, Former Secretary of Labor and author of The System

“LaDoris Cordell uses her experiences as a judge to provide unique, important insights into our legal system and how to reform it. This beautifully written book shows us what it’s like to wear judicial robes and to make judgments that determine the course of other people’s lives.”
—Erwin Chemerinsky, Dean and Jesse H. Choper Distinguished Professor of Law, University of California, Berkeley School of Law

"Her Honor is exceptional—an instant classic that will undoubtedly enter the canon of the greats of non fiction. As funny and charming as Bill Bryson, but as powerful and eye-opening as Bryan Stevenson, Her Honor, part memoir, part primer on America's court system is a joy, a revelation, and an education. Judge Cordell is a tough, humane, and wildly comedic guide through the judiciary, warts and all. The book succeeds on every possible level. I devoured it and loved every minute, laughing out loud at times, wiping away tears at others, and even mourning as I neared its triumphant ending. Thanks to this extraordinary book, I've become a more informed citizen. Judge Cordell is exactly what America needs right now.”
—Susannah Cahalan, #1 New York Times bestselling author of Brain on Fire and The Great Pretender

"Her Honor is essential and urgent reading. With openness, honesty, and courage, Judge Cordell offers a rare and illuminating look at what it is really like to be a judge. She shares the moments of warmth and humor, the unexpected victories, the redemptions—and the moments of fear, frustration, regret, and uncertainty. She asks us to stand by her side on the good days and the bad days, to confront the tragic choices and deep inequities, so that we may know the truth about our legal system and heed the call to make it better."
—Adam Benforado, New York Times bestselling author of Unfair: The New Science of Criminal Injustice