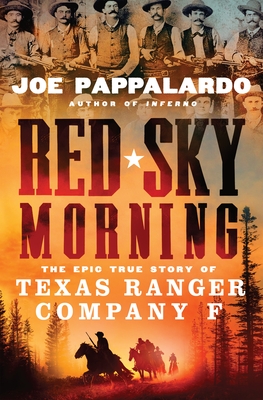 The explosive and bloody true history of Texas Rangers Company F, made up of hard men who risked their lives to bring justice to a lawless frontier.

Between 1886 and 1888, Sergeant James Brooks, of Texas Ranger Company F, was engaged in three fatal gunfights, endured disfiguring bullet wounds, engaged in countless manhunts, was convicted of second-degree murder, and rattled Washington, D.C. with a request for a pardon from the US president. His story anchors the tale of Joe Pappalardo's Red Sky Morning, an epic saga of lawmen and criminals set in Texas during the waning years of the “Old West.”

Alongside Brooks are the Rangers of Company F, who range from a pious teetotaler to a cowboy fleeing retribution for killing a man. They are all led by Captain William Scott, who cut his teeth as a freelance undercover informant but was facing the end of his Ranger career. Company F hunted criminals across Texas and beyond, killing them as needed, and were confident they could bring anyone to “Ranger justice.” But Brooks’ men met their match in the Conner family, East Texas master hunters and jailbreakers who were wanted for their part in a bloody family feud.

The full story of Company F’s showdown with the Conner family is finally being told, with long dead voices being heard for the first time. This truly hidden history paints the grim picture of neighbors and relatives becoming snitches and bounty hunters, and a company of Texas Rangers who waded into the conflict only to find themselves over their heads – and in the fight of their lives.

JOE PAPPALARDO is the author of the critically acclaimed books Inferno: The True Story of a B 17 Gunner’s Heroism and the Bloodiest Military Campaign in Aviation History, Sunflowers: The Secret History and Spaceport Earth: The Reinvention of Spaceflight. Pappalardo is a freelance journalist and former associate editor of Air & Space Smithsonian magazine, a writing contributor to National Geographic magazine, a contributor to Texas Monthly, and a former senior editor and current contributor to Popular Mechanics. He has appeared on C-Span, CNN, Fox News and television shows on the Science Channel and the History Channel.

"Fast-paced and full of local politics and old-fashioned gunfights—a pleasure for fans of true crime and oaters alike." —Kirkus Reviews

"Red Sky Morning tells the tale of a bloody family rivalry worthy of a Jason Isbell song. The sharply drawn narrative brings to life a rich and interwoven cast of pioneers, outlaws, and gunslinging Rangers as they prepare for a showdown in the piney woods of East Texas. Pappalardo has delivered a hard-scrabble story that pairs well with a glass of nice whiskey." —Michael Mooney, New York Times bestselling author and Texas Monthly contributor

"This tale of Texas Rangers facing steep odds in doling out frontier justice reads like a heart-thumping, spur-jangling Sergio Leone epic—crackling with tension and personalities bigger than the Waco sky. But here's what makes it better than any big-screen Western: Joe Pappalardo has hunted down the historical threads that prove it all really happened." —David Howard, author of Chasing Phil: The Adventures of Two Undercover Agents with the World's Most Charming Con Man

"With both his heroism and his flaws, Medal of Honor recipient 'Snuffy Smith' perfectly represents the dramatic and deadly campaign for control of the skies over Europe in World War II. The ornery, charming, and brave B-17 tail gunner anchors this thrilling tale of how, warts and all, we won that brilliant and bloody air war." —Tom Clavin, New York Times bestselling author of Tombstone and co-author of Lucky 666

“Inferno is written with the energy, resolve, bloody-mindedness of a B-17. This is the Greatest Generation reconsidered as a diminutive Michigan-born anti-hero who is awarded the Congressional Medal of Honor for his amazing conduct on his first combat mission over Europe, May 1, 1943. Pappalardo's story takes on more than Maynard's Smith's pell-mell and eventually surprisingly sad life. The book reconsiders the still controversial American decision to carry out daylight bomber attacks, 1943-44, that led to well-documented and shocking casualty rates. This is a thrilling and important read." —John Batchelor, nationally syndicated radio host and author