Everything Is Spiritual: Who We Are and What We're Doing Here (Hardcover) 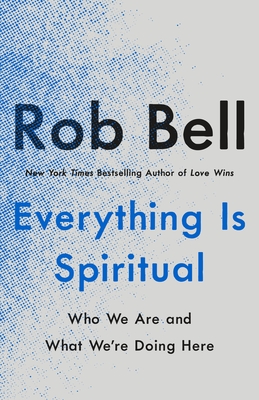 I’ve had a sense since I was young
that there’s more going on here, that
the world is not a cold, dead place,
that it’s alive in some compelling and
mysterious way.

This book is about that sense. I’ve tried
to listen to it, and follow it, and trust it.
It’s been devastating at times, intoxicating
at others, heartbreaking and maddening
and euphoric——how do you make sense
of this experience we’re having here on
this ball of rock hurtling through space
at 67,000 miles an hour?

There are big questions: Everything
is made of particles and atoms, and the
universe has been expanding for thirteen
billion years?

And then there are those other questions, about the people and places and
events that have shaped us.

HOWEVER MASSIVE AND
COSMIC IT ALL IS, IT’S ALSO
REALLY, REALLY PERSONAL.
AND SPIRITUAL.
THAT’S THE WORD FOR IT.

That’s the sense I’ve been following
for a while now——this awareness that
there’s something bigger happening in
the depth and complexity and struggle
of life, something that connects us all,
reminding us that it all matters and it’s
all headed somewhere.

Part memoir, part confession, part
extended riff on the endlessly evolving
nature of reality, Everything Is Spiritual
is an invitation to see what you’ve been
a part of this whole time.

ROB BELL is a New York Times bestselling author, speaker, and spiritual teacher. His books include Love Wins, How to Be Here, What We Talk About When We Talk About God, Velvet Elvis, The Zimzum of Love, Sex God, Jesus Wants to Save Christians, and Drops Like Stars. He hosts the weekly podcast The Robcast, which was named by iTunes as one of the best of 2015. He was profiled in The New Yorker and in TIME Magazine as one of 2011’s hundred most influential people. He and his wife, Kristen, have three children and live in Los Angeles.

"In Everything Is Spiritual, Rob Bell updates Teilhard de Chardin’s Catholic mysticism, makes sexier Werner Heisenberg’s quantum physics, and baptizes Jewish Kabbalah in an exciting vision of the future of human evolution. Bell challenges the notion that science and belief are at war with his sublime fusion of Christian faith and modern evolutionary science. Bell’s book is the perfect antidote to the plague of an evangelical worldview that is captive to imperial dreams and a literalism that kills the spirit of Christianity. Everything Is Spiritual is a bracing and stirring manifesto for a fresh contemporary vision of an ancient faith." -- MICHAEL ERIC DYSON, New York Times bestselling author of TEARS WE CANNOT STOP

“Nobody else can take ancient teachings and modern science, and blend them together into wisdom that makes sense to me, and heals me. Rob’s unorthodox and bold thinking stirs my intellect, comforts my heart, and makes me believe that — within all the frightening chaos of the unknowable universe — I still have a sacred place. His work is a sacred gift to a troubled world.” -- ELIZABETH GILBERT, New York Times bestselling author of BIG MAGIC and CITY OF GIRLS

“Bell is at the forefront of a rethinking of Christianity in America.” -- TIME MAGAZINE

“Bell looks at the world, at the universe, with both childlike wonder and insatiable curiosity. A lovely, poetic meditation on what brings us together." —Booklist