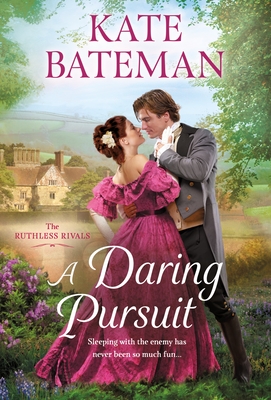 This is book number 2 in the Ruthless Rivals series.

The Davies and Montgomery families have been locked in an ancient feud. But it’s a thin line between love and hate in Kate Bateman's A Daring Pursuit.

TWO ENEMIES
Carys Davies is doing everything in her power to avoid marriage. Staying single is the only way to hide the secret that could ruin her—and her family—if it was revealed. For the past two seasons she’s scandalized the ton with her outrageous outfits and brazen ways in a futile bid to deter potential suitors. Outwardly confident and carefree, inside she’s disillusioned with both men and love. There’s only one person who’s never bought her act—the only man who makes her heart race: Tristan Montgomery, one of her family’s greatest rivals.

ONE SCANDALOUS BARGAIN
Wickedly proper architect Tristan needs a respectable woman to wed, but he’s never stopped wanting bold, red-headed Carys. When she mockingly challenges him to show her what she’s missing by not getting married, Tristan shocks them both by accepting her indecent proposal: one week of clandestine meetings, after which they’ll go their separate ways. But kissing each other is almost as much fun as arguing, and their affair burns hotter than either of them expects. When they find themselves embroiled in a treasonous plot, can they trust each other with their hearts, their secrets…and their lives?

Kate Bateman, (also writing as K. C. Bateman), is the #1 bestselling author of historical romances, including her RITA® nominated Renaissance romp, The Devil To Pay, the Bow Street Bachelors series (This Earl of Mine, To Catch an Earl, and The Princess and the Rogue), along with the novels in the Secrets & Spies series (To Steal a Heart, A Raven’s Heart, and A Counterfeit Heart). When not writing novels that feature feisty, intelligent heroines and sexy, snarky heroes you want to both strangle and kiss, Kate works as a fine art appraiser and on-screen antiques expert for several popular TV shows in the UK. She splits her time between Illinois and her native England. Follow her on Twitter to learn more.

"A Daring Pursuit is a winsome enemies-to-lovers tale.” - Romance Junkies

"Bateman launches a Regency trilogy with this pitch-perfect enemies-to-lovers romance centered on the feuding Montgomery and Davies families...Brimming with intrigue, passion, and humor, this is sure to win the author new fans." - Publishers Weekly (Starred Review) on A Reckless Match

"Heroic adventures and good deeds add to the fun, while secondary characters foreshadow delightful romances of their own in future installments." - Booklist on A Reckless Match

"This smart Regency romance and its resilient heroine are sure to win over readers." - Publishers Weekly (Starred Review) on The Princess and the Rogue

“The Princess and the Rogue is a sweet, steamy, romantic, humorous, yet slightly angsty regency/historical romance deftly balanced with bits of mystery, royal intrigue, and action that readers will find hard to put down." - Affair de Coeur

"What's not to enjoy about a roguish former soldier and a Russian princess in disguise?...[A] thoroughly entertaining read." - BookPage on The Princess and the Rogue

"The Princess and the Rogue is a delightful Regency romance that'll leave readers with a smile." - Fresh Fiction

“An excellent story with delightful characters, including Seb's partners, The Princess and the Rogue is the perfect conclusion to this terrific series.” - Romance Reviews Today

"Bateman's scintillating first Bow Street Bachelors Regency is full of intense emotions and dramatic twists. Intelligent, affable characters make this fast-paced novel shine, especially for fans of clever women and the men who sincerely admire them. Future installments will be eagerly anticipated by Regency readers." - Publishers Weekly (Starred Review) on This Earl of Mine

"Dashing, daring, and deliciously romantic!" - USA Today bestselling author Caroline Linden on This Earl of Mine

"A riveting new voice for Regency readers! Kate Bateman is now on my auto-buy list." - Janna MacGregor, author of The Good, the Bad, and the Duke on This Earl of Mine