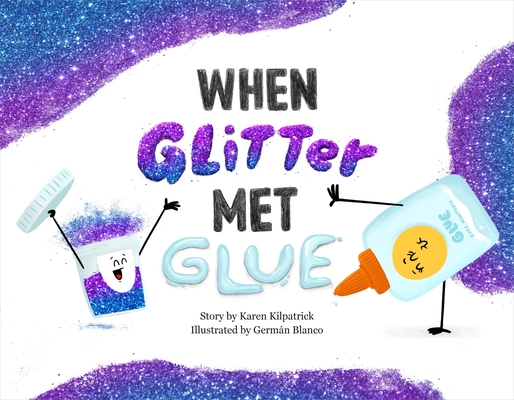 The third hilarious picture book in the award-winning When Pencil Met Eraser series in which underappreciated Glue longs to stand out, and soon meets a new friend, Glitter, who helps bring out her inner sparkle, confidence, and creativity.

Glue loves making art with her friends—especially pasting on googly eyes!—but sometimes she feels invisible. Instead of always being stuck in the background, Glue wants to be noticed like Pencil and colorful like the Markers! How can she find a way to stand out?

When a new friend named Glitter arrives in a swirl of sparkles, Glue and Glitter team up to make something completely original and help Glue shine like the star she truly is.

Karen Kilpatrick has been telling and writing stories for as long as she can remember. A former attorney who left the legal industry for the toy industry, she is the author of When Pencil Met Eraser and the Pumpkinheads children's book series and cocreator with her two daughters of the toy brand, MeBears. She lives in South Florida with her three kids.

Germán Blanco has been using pencils all his life. Erasers, too. He unknowingly began his artistic career as a kid by doodling in school whenever he was bored (sorry, mom!). He later became a graphic designer but he found his passion in illustration. When he’s not drawing, he enjoys watching movies and playing football (aka soccer).

"An imaginative and engaging look into artistic possibility." —Kirkus Reviews

“Readers young and old alike will love this imagining of the dynamic duo that is Pencil and Eraser.” —School Library Journal