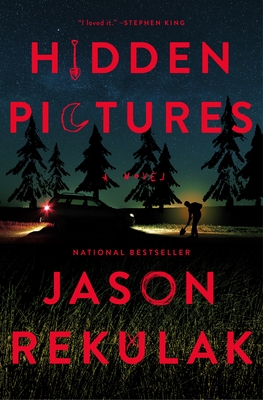 NATIONAL BESTSELLER · OPTIONED FOR NETFLIX BY A PRODUCER OF THE BATMAN

“I loved it." —Stephen King

From Edgar Award-finalist Jason Rekulak comes a wildly inventive spin on the supernatural thriller, for fans of Stranger Things and Riley Sager, about a woman working as a nanny for a young boy with strange and disturbing secrets.

Mallory Quinn is fresh out of rehab when she takes a job as a babysitter for Ted and Caroline Maxwell. She is to look after their five-year-old son, Teddy.

Mallory immediately loves it. She has her own living space, goes out for nightly runs, and has the stability she craves. And she sincerely bonds with Teddy, a sweet, shy boy who is never without his sketchbook and pencil. His drawings are the usual fare: trees, rabbits, balloons. But one day, he draws something different: a man in a forest, dragging a woman’s lifeless body.

Then, Teddy’s artwork becomes increasingly sinister, and his stick figures quickly evolve into lifelike sketches well beyond the ability of any five-year-old. Mallory begins to wonder if these are glimpses of a long-unsolved murder, perhaps relayed by a supernatural force.

Knowing just how crazy it all sounds, Mallory nevertheless sets out to decipher the images and save Teddy before it’s too late.

Jason Rekulak is the author of The Impossible Fortress, which was translated into 12 languages and was nominated for the Edgar Award. For many years, he was the publisher of Quirk Books, an independent press, where he acquired and edited multiple New York Times bestsellers. He lives in Philadelphia with his family.

"It's almost enough to make a person believe in ghosts..." —Kirkus Reviews

"The explosive third act gives this story a nail-biting ending sure to thrill. Paranormal perfection." —Booklist

"I read Hidden Pictures and loved it. The language is straightforward, the surprises really surprise, and it has that hard-to-achieve propulsiveness that won't let you put it down. And the pictures are terrific!" —Stephen King

“Whip-smart, creepy as hell, and masterfully plotted, Hidden Pictures is the best new thriller novel I’ve read in years. Destined to be a classic of the genre.” —Ransom Riggs, bestselling author of Miss Peregrine’s Home for Peculiar Children

“Hidden Pictures is one of those rare gems that’s aware of the rules of the genre even as it breaks them and invents new ones. It’s a gas to read, full of wonderful new ideas, both literary and visual. This is one of those books you leave out long after finishing, just so your friends might see it and give you the chance to share it! Jason Rekulak is going to be telling us all stories for a good long while.” —Scott Frank, Academy Award-nominated screenwriter and Emmy-winning director of The Queen’s Gambit

"For a few days, my life was completely hijacked by Jason Rekulak's Hidden Pictures, one of the best and most inventive ghost stories I've read in years. The damaged but still fighting Mallory Quinn stole my heart and her plunge into supernatural wonder gripped my imagination. It's a beautiful dark rush of a novel. I'm already excited to read it again." —Joe Hill

“Hidden Pictures isn’t a ghost story, it’s a scalpel that slices into our smug sense of self-satisfaction so deeply it hits bone. A perfect summer thriller complete with vengeful spirits, class warfare, and it even has pictures. What more could you want?” —Grady Hendrix, bestselling author of The Final Girl Support Group