The Favor: A Novel (Hardcover) 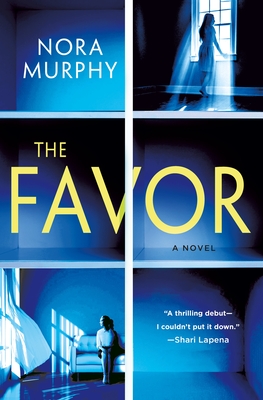 A gripping debut domestic suspense novel, Nora Murphy's thrilling The Favor explores with compassion and depth what can happen when women pushed to the limit take matters into their own hands.

Leaving would be dangerous. Staying could be worse.

Leah and McKenna have never met, though they have parallel lives.

They don’t—ever—find themselves in the same train carriage or meet accidentally at the gym or the coffee shop.

They don’t—ever—discuss their problems and find common ground.

They don’t—ever—acknowledge to each other that although their lives have all the trappings of success, wealth and happiness, they are, in fact, trapped.

Leah understands that what’s inside a home can be far more dangerous than what’s outside. So when she notices someone else who may be starting down the same path she’s on, she pays attention. She watches over McKenna from afar. Until one night she sees more than she bargained for. Leah knows she can’t save herself, but perhaps she can save McKenna.

Leah and McKenna have never met. But they will.

NORA MURPHY attended law school in Washington, D.C., then worked as a judicial law clerk before transitioning to private practice. During law school, she participated in two clinics through which she represented and studied the issues facing survivors of intimate partner violence. A practicing attorney, Nora writes as much as she can, usually long before the sunrise or on her phone for brief moments when the inspiration strikes. Nora resides in Maryland with her husband, young son, and five rescue pets. When she’s not working, writing, or chasing her toddler, Nora can be found contemplating her next ice cream run or reading. The Favor is her first novel.

“The Favor possesses an undeniable momentum even as you dread what it will throw at you next. But it’s more nuanced than typical thriller fare, offering a broad, detailed, inside look into domestic abuse, showing just how abuse can happen, why it continues, the forms it can take and the struggle to heal and build a new life after escaping it... A well executed crime thriller debut."—Associated Press

"This debut novel packs quite a wallop. Many readers will detect a similarity here to what happened to a certain girl on a train, but might that connection be its own kind of red herring in a novel full of dizzying switchbacks? An audacious and completely successful thriller."—Booklist (Starred)

"An unnerving feminist retake on Strangers on a Train . . . Strikes an unsettling chord from the beginning and never lets go.”—Kirkus Reviews (Starred)

"A dark, unnerving domestic thriller about the consequences of fighting back when relationships go wrong."—Parade, "Books We Love"

“One of the best-plotted thrillers I’ve read in ages… get this book for the very original storyline, true-to-life characters, and a searing look at the pain and mind games endured behind too many closed doors.”—First Clue (Starred)

"Leah and McKenna are fully realized characters whose anger, fear, and despair are palpable. A kaleidoscopic narrative amplifies tension and imparts nuance by examining the two households from inside and out. Murphy paints a powerful portrait of domestic abuse."—Publishers Weekly

"Hard to put down. Murphy has constructed the perfect crimes and sympathetic major characters. A great debut novel, and we can hope there will be more to follow."—New York Journal of Books

"Taut, compelling and deliciously dark, I tore through The Favor."—B.A. Paris, New York Times bestselling author of The Therapist

"A brilliant, gripping, dark and superbly written debut. I was transfixed by Leah and McKenna and the deftly woven plot that connects them. Nora Murphy is one to watch." —Gilly Macmillan, New York Times bestselling author of The Long Weekend

"Nora Murphy's The Favor is a tense and gripping read about the tacit sisterhood between two unlikely vigilantes. At once strangers and soulmates, these women reflect one another—each trapped in a dark and spiraling descent behind the closed door of a seemingly lovely home. With echoes of Big Little Lies and Strangers on a Train, Nora Murphy's The Favor is impossible to put down."—Mary Dixie Carter, author of The Photographer

"I loved following the parallel lives of Leah and McKenna, two strangers whose actions tie them together forever. I felt as if I was there with them, living the horrors they had to endure, although Nora Murphy portrays the women as survivors instead of victims. The Favor is a page-turning debut that will have you questioning the lengths you’d go to save someone else, even though it’s you that needs saving."—Sandie Jones, New York Times bestselling author of The Guilt Trip

“Dark and unsettling, The Favor is a gripping story of bravery and compassion which lingers long after the final page.”—Victoria Selman, international bestselling author of Blood for Blood