A Diary of the Plague Year: An Illustrated Chronicle of 2020 (Hardcover) 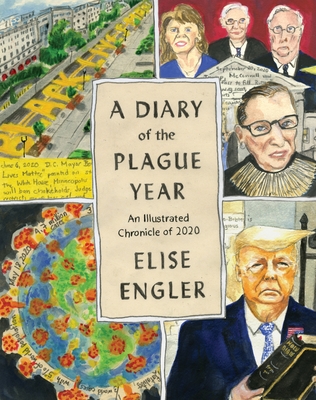 An extraordinary illustrated chronicle of 2020 that captures this indelible year in America in all its tragic, surreal, epic, and (sometimes) comedic intensity

Artist Elise Engler set herself a task five years ago: to illustrate the first headline she heard on her bedside radio every morning. The idea was to create a pictorial record of one year of listening to the news. But when Donald Trump was elected, the headlines turned too wild for her to stop the experiment.

Then 2020 happened. Was there ever such a year? Headlines about the death of Kobe Bryant and Donald Trump's impeachment began to give way to news of a mysterious virus in China, and Engler’s pages were quickly filled with the march of COVID-19: schools closing their doors, hospitals overflowing, graveyards full to capacity. Day by day, Engler drew every shocking turn of the year: the police murder of George Floyd and protests around the globe; a war against science and those who preached it; fires consuming California; a vicious election, absurdly contested. Other stories appeared, too: “Harvey Weinstein Sentenced,” “Ruth Bader Ginsburg Hospitalized,” “China Extends Control over Hong Kong,” and—on repeat—“Stock Market Plunges.”

The result is a powerful visual record of an unprecedented time, collected in A Diary of the Plague Year, which follows the headlines from the first appearance of the coronavirus to the inauguration of President Joe Biden. Made in real time, Engler’s vibrant, immediate images recapture what it was like to live through 2020, bringing texture, feeling, and even charm to what we might not remember and what we will never forget.

Elise Engler is a visual artist who has shown in galleries across the United States and Europe. A Diary of the Plague Year is her first book. The recipient of a New York Foundation for the Arts Fellowship in drawing and an Adolph and Esther Gottlieb Foundation grant in painting, Engler has also received two MacDowell residencies and a fellowship at Civitella Ranieri in Umbria, Italy. Her work has been written about in Art in America, the New Yorker, and the New York Times, among other publications. Engler teaches at City College, City University of New York, and the School of Visual Arts and for the Battery Park City Authority. She lives in New York.

"A Diary of the Plague Year joins a shelf that’s sure to be crowded with reflections on one of the most tumultuous years in a century. Engler’s work will almost certainly stand alone in its effect, though, with its blend of gravitas and levity . . . of our darkest moments rendered with the whimsical sublimity you can only find in the illustrator’s hand."
—Virginia Quarterly Review

"Inviting and salient . . . We can rely on A Diary of the Plague Year—the book reminds us that the human spirit is undaunted. That is why we remain, here to fight another day."
—BookTrib

"In electric, dynamic painting, and distinctive handwritten text, this diary is animated by Engler’s creative, associative mind . . . Engler captures the urgency of the summer’s protests . . . and her portraits of players in the national drama . . . seem at once intimate yet kaleidoscopic."
—The National Book Review

"Truth can be stranger than fiction . . . Engler’s dispatches sometimes read as passages from a very compelling dystopian science fiction novel, albeit they’re all too real . . . Engler’s art is about keen observation and finding something transcendent . . . Engler’s book [is] a record from a seasoned artist who was there at her drawing board when it happened."
—Comics Grinder

"A stunning visual chronicle . . . In a blunt style that captures the urgency and confusion of that year, Engler’s paintings offer an extraordinarily haunting time capsule of an era readers won’t soon forget."
—Publishers Weekly

"Engler combines the sharp eye of an editorial caricaturist with the vibrant color of a portraitist, and the energy of the artwork underscores the sense of urgency in the day's news . . . A dynamic artistic rendering of chaos survived—at least so far."
—Kirkus Reviews

"Engler pairs vibrant images with handwritten text in the dynamic paintings that fill this complexly engrossing visual plague diary.... Engler's unique and moving chronicle-in-paintings captures, with a global perspective, the year’s fears and sorrows, outrages and struggles, encapsulating a profound amount of information, reminding us of how crucial journalism is and affirming life’s intricate interconnections."
—Booklist

"I found myself riveted as Engler’s account of the year unspooled, even though, yes, I know how it ended . . . Engler's gaze is . . . intimate, with a wry sense of humor where appropriate, and the resulting book is a detailed record of a deeply strange year.
—Bloom

"Never has the daily tempest of news been visually portrayed so brilliantly and poignantly. Elise Engler’s illustrated journalism is a treat to the eye and a balm to our storm-tossed souls."
—Edward Koren, New Yorker cartoonist

"A Diary of the Plague Year is a must order! These astute, lively daily works of art record and depict the bizarre, frightening, challenging, and humorous events of our past pandemic election year. We learned that nothing was predictable, that anything could happen and did—and Elise Engler was there."
—Joyce Kozloff

"If the year 2020 had kept a diary, this would be it: a journal of seemingly disparate events that combine, like pieces of a puzzle, to form a haunting portrait of the year when the fractured and dissonant tribes of mankind were all stopped in their tracks."
—Darrin Bell, author of Candorville and Rudy Park