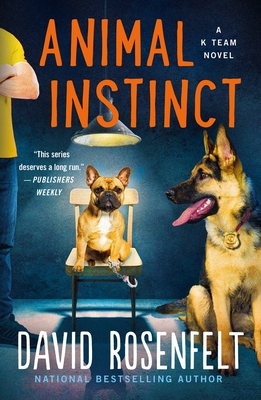 The K Team is back in the second installment in this spinoff series in the beloved Andy Carpenter mysteries by bestselling author David Rosenfelt.

Corey Douglas and his K-9 partner, a German shepherd named Simon Garfunkel, are recently retired police officers turned private investigators. Along with fellow former cop Laurie Collins and her investigating partner, Marcus, they call themselves the K Team, in honor of Simon.

The K Team’s latest case – a recent unsolved murder – gives Corey a chance to solve "the one that got away". Corey knew the murder victim from his time on the force, when he was unable to protect her in a domestic dispute. Now, he is convinced the same abusive boyfriend is responsible for her murder. With some help from Laurie’s lawyer husband, Andy Carpenter, the K Team is determined to prove what the police could not, no matter the cost. What they uncover is much more sinister than they could have imagined.

Known for his dog-loving stories and addictive characters, bestselling mystery author David Rosenfelt presents Animal Instinct, the second installment in this engrossing new series about a dynamite investigative team and their canine partner.

“A second outing for Paterson’s preeminent investigators ensnares one of their own members in uncomfortable ways. . . Though the case is a hot mess, the criminals’ sublimely simple central concept is worth all those subsidiary homicides.” — Kirkus Reviews

“A chiller with laughs.” —David Rothenberg on WBAI/RADIO

Praise for The K Team

"The K Team makes a strong companion to Rosenfelt’s ongoing series and it should be fighting crime for many novels." —Associated Press

“Corey serves as an investigator and narrator every bit as ebullient as Andy and a lot more diligent . . . If you liked Rosenfelt's rollicking previous series, you'll like this one too.” — Kirkus Review

“A promising start to what’s likely to be a long-running series.” —Publishers Weekly

“Fans of the "Andy Carpenter" series will find much to enjoy here, including some cameos from Carpenter himself.” —Library Journal