Lightning Down: A World War II Story of Survival (Paperback) 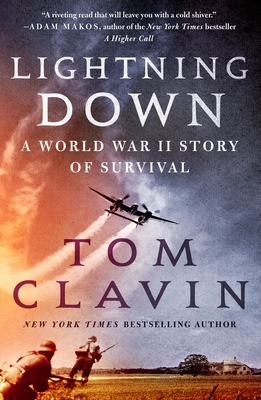 An American fighter pilot doomed to die in Buchenwald but determined to survive.

On August 13, 1944, Joe Moser set off on his forty-fourth combat mission over occupied France. Soon, he would join almost 170 other Allied airmen as prisoners in Buchenwald, one of the most notorious and deadly of Nazi concentration camps. Tom Clavin's Lightning Down tells this largely untold and riveting true story.

Moser was just twenty-two years old, a farm boy from Washington State who fell in love with flying. During the War he realized his dream of piloting a P-38 Lightning, one of the most effective weapons the Army Air Corps had against the powerful German Luftwaffe. But on that hot August morning he had to bail out of his damaged, burning plane. Captured immediately, Moser’s journey into hell began.

Moser and his courageous comrades from England, Canada, New Zealand, and elsewhere endured the most horrific conditions during their imprisonment... until the day the orders were issued by Hitler himself to execute them. Only a most desperate plan would save them.

The page-turning momentum of Lightning Down is like that of a thriller, but the stories of imprisoned and brutalized airmen are true and told in unforgettable detail, led by the distinctly American voice of Joe Moser, who prays every day to be reunited with his family.

Lightning Down is a can’t-put-it-down inspiring saga of brave men confronting great evil and great odds against survival.

TOM CLAVIN is a #1 New York Times bestselling author and has worked as a newspaper editor, magazine writer, TV and radio commentator, and a reporter for The New York Times. He has received awards from the Society of Professional Journalists, Marine Corps Heritage Foundation, and National Newspaper Association. His books include the bestselling Frontier Lawmen trilogy—Wild Bill, Dodge City, and Tombstone—and Blood and Treasure with Bob Drury. He lives in Sag Harbor, NY.

"This book is an absolute winner for your Dad, your Granddad, your uncle, anyone who’s a veteran or a World War II buff or readers seeking a tale of heroism. Find it now, and let “Lightning Down” strike you." —Terri Schlichenmeyer for Commercial News

“Clavin’s latest, like his other histories, reads like a novel and it will keep readers turning the pages …This is an engaging and captivating story capturing the courage and strength of humanity under extreme conditions. Highly recommended.” —Library Journal (starred review)

"The journalist and bestselling popular historian returns with the story of an American soldier who survived Nazi terror...Scrupulous, squirm-inducing...A fast-paced account of a little-known POW experience.” —Kirkus Reviews

"Clavin paints the horrors of life in the concentration camp in harrowing detail. The details Clavin unearths ... are grimly fascinating." —Publishers Weekly

"Lightning Down is a historical biography that contains the information of a textbook while reading like a novel … Clavin’s style and structure induce enough suspense to keep readers wrapped up in the moment. And, despite the horrors that Moser experienced and Clavin describes vividly, Lightning Down has an overarching positivity and celebration of resilience." —AP News

"Clavin has constructed an account filled with harrowing images that will linger in readers’ minds as they doubtless lingered in Moser’s memory...Reading this war and captivity history as seen through the eyes of a strong, resilient survivor is a true education." —BookReporter.com

"Lightning Down is indeed a thriller. The writing is great, easy to read and digest with full emotions...a near perfect suspense story." —Argunners magazine

"Lightning Down is a wonderful testament to the human spirit, an incredible story of courage and resilience, of one man's heroism both in a cockpit in the skies above Nazi-occupied Europe and in Buchenwald, the dark heart of the Third Reich. Don't miss this nail-biter from a true master, Tom Clavin." —Alex Kershaw, New York Times bestselling author of Against All Odds

"When a quiet American farm boy named Joe fell in love with the Lockheed P-38 Lightning, he had no idea that his dream of becoming a fighter pilot would catapult him into one of the most harrowing stories of World War II. Tom Clavin's Lightning Down whisked me from the rural peace of the Pacific Northwest to aviation heroics on D-Day, from a nightmare prison train to a Nazi concentration camp, from a brutal frozen death march to a German POW camp that pushed thousands of men to the outer edge of human endurance—and beyond. This shocking true tale of a small band of American flyers imprisoned by the Third Reich is at turns horrifying and triumphant, revealing the galvanizing power of battlefield brotherhood and the extraordinary resilience of the human spirit. I began rooting for Joe on Page 1!" —Lynn Vincent, New York Times bestselling coauthor of Indianapolis: The True Story of the Worst Sea Disaster in U.S. Naval History and the Fifty-Year Fight to Exonerate an Innocent Man

"Buchenwald was the place no allied airman was supposed to wind up—but they did. In this priceless eyewitness history, one of WWII’s most incredible stories has finally found its teller. Lightning Down is a riveting read that will leave you with a cold shiver." —Adam Makos, author of the NY Times bestseller A Higher Call