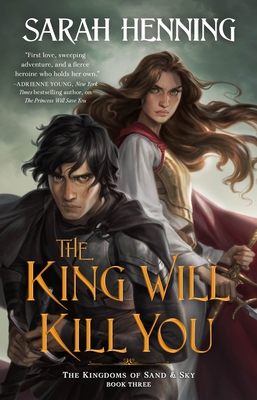 This is book number 3 in the Kingdoms of Sand and Sky series.

The Princess Bride meets Game of Thrones in this commercial YA trilogy from acclaimed fantasy author Sarah Henning.

Princess Amarande is finally on the verge of having everything she wants. To be with her true love Luca, no one nor law standing in the way. To rule Ardenia as queen outright, no marriage necessary, as Luca does the same with the reformed Torrence. To rebuild the continent of The Sand and Sky into a place not defined by archaic, patriarchal laws, but by the will of its people.

However, threats await in the shadows of Amarande’s hoped-for happily ever after. One expected and deadly to both her love and every one of her objectives. The other, unexpected, and arising with a vicious aim: revenge at any cost. Against the princess who killed him, the boy whose love made her do it, and the continent cruel enough to deserve his rage.

The King Will Kill You is the epic, pulse-pounding conclusion to Sarah Henning’s Kingdoms of Sand and Sky trilogy.

Sarah Henning is the author of several books for young adults, including the Indies Introduce/Indies Next selection and Junior Library Guild Gold Standard Selection Sea Witch, and its sequel, Sea Witch Rising; The Princess Will Save You, The Queen Will Betray You, and The King Will Kill You, as well as Throw Like A Girl and its companion book, It's All In How You Fall. Her first middle grade book, Monster Camp, is scheduled to release in Summer 2023, and she appears in the girls-in-sports anthology, Out of Our League (2024). When not writing, she runs ultramarathons, hits the playground with her two kids, and hangs out with her husband Justin, who doubles as her long-suffering IT department. Sarah lives in Lawrence, Kansas, hometown of Langston Hughes, William S. Burroughs, and a really good basketball team.