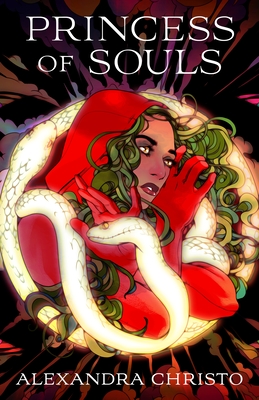 From Alexandra Christo, the author of To Kill a Kingdom, comes Princess of Souls, a Rapunzel-inspired YA fantasy romance about a teen witch groomed to steal souls for an immortal king and the reckless, rebellious boy to whom her fate is tied.

For sixteen years, Selestra has been trapped in her tower on the Floating Mountain, preparing to take her mother’s place as the King's Witch, who foretells deaths in the Festival of Predictions. Outrunning your fate earns a wish and the chance to steal the King’s immortality. But die and your soul is forfeit. And though thousands have tried, nobody has ever beaten death.

A soldier in the King's army, Nox is an unlikely candidate for the Festival, but, driven by revenge, he is determined to steal the King’s immortality and kill the entirety of his court, starting with Selestra.

Yet when Selestra touches Nox in her very first prediction, their fates become entwined, and death seeks to take both their souls. Only by working together can they survive long enough to escape the dark fate and the immortal King that now hunts them.

Alexandra Christo is a British author whose characters are always funnier and far more deadly than she is. She studied Creative Writing at university and graduated with the desire to never stop letting her imagination run wild. She currently lives in Hertfordshire with a rapidly growing garden and a never-ending stack of books. Her debut novel To Kill a Kingdom is an international bestseller and her Young Adult fantasy books have been translated into over a dozen languages worldwide.

"High stakes and dangerous escapades. Princess of Souls takes you on a thrilling journey alongside a witch trying to walk her own path and the clever soldier laying the way. This is Rapunzel glistening with dark magic galore." -- Chloe Gong, the New York Times bestselling author of These Violent Delights

"Christo has cast a spell with this decadently dark tale of witches, fate, and defying death; her hallmark humor is as sharp as a blade; equally, her expert handling of a romance sure to be devoured by readers sparks true magic" —Ciannon Smart, author of Witches Steeped in Gold

"Princess of Souls sucked me in from the very first sentence. Its premise is as delightful as it is creepy, with characters to match. Nox and Selestra are here for vengeance, and everybody else had better stay out of their way." -- Tricia Levenseller, author of The Shadows Between Us

"Dual perspectives keep the narrative moving, and vibrant imagery combined with humorous banter and excellent interpersonal chemistry will make this a joy for fans of slow-burn romances. " —Booklist Online

"Christo’s writing is evocative and propulsive, whisking ­characters from one heart-stopping confrontation to the next ... readers of fairy-tale retellings and ­fast-paced YA fantasy will find this a unique, compelling reimagining of the ­classic ­Rapunzel tale." -- School Library Journal

"Fans of Marissa Meyer will like Christo’s highly digestible writing style and the fast-paced action-adventure story that echoes modern classics like Avatar: The Last Airbender and The Princess Bride." —The Bulletin of the Center for Children's Books (BCCB)


For To Kill a Kingdom:

“With well-crafted fight scenes and vivid descriptions, Christo has created a world of beauty and monstrosity that will draw readers in.” —Publishers Weekly

“Stellar world building and nonstop action will keep readers hooked on this twisted reimagining of “The Little Mermaid.” —Booklist Online

“Fantasy fans will like the idea of sirens and piratelike princes as the characters who are imaginative and well developed.” —School Library Journal

“Readers who enjoy dark fairy tales of 'The Little Mermaid' persuasion will sink into this bloody tale with pleasure.” —RT Book Reviews

“The world building is deft, and the spectacular ending is a happy one for Lira and Elian, but it will leave readers blissfully wanting more.” — The Bulletin of the Center for Children's Books (BCCB)


For Into the Crooked Place:

"With its gangland details, creative magical caste system and surprisingly brutal characters, Into the Crooked Place is very much its own thing. And that thing will likely be a story you can’t put down." —Culturess

"Christo offers the reader creative and thoughtful backstories for each protagonist, along with fully realized worlds rife with magic . . . Everywhere are people of color and acknowledgment of LGBTQ characters—nice touches not always seen in fantasy." —Booklist

"Christo has done an amazing amount of worldbuilding with this book . . . The way her characters use magic, the mythology of each of her characters within their backstories, and the timing with which these backstories are revealed—pure magic, pun intended!" —MuggleNet

"It’s a gangster heist story dealing with a lot of heavy themes, but I think everyone will find something to love in this story . . . . It's a wonderful read with awesome characters." —The Nerd Daily