The Radical Potter: The Life and Times of Josiah Wedgwood (Paperback) 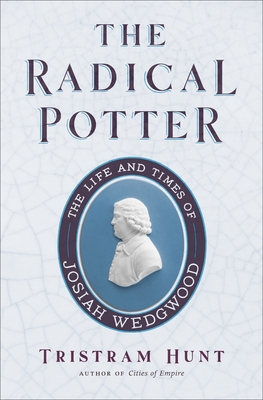 From one of Britain’s leading historians and the director of the Victoria & Albert Museum, a scintillating biography of Josiah Wedgwood, the celebrated eighteenth-century potter, entrepreneur, and abolitionist

Wedgwood’s pottery, such as his celebrated light-blue jasperware, is famous worldwide. Jane Austen bought it and wrote of it in her novels; Empress Catherine II of Russia ordered hundreds of pieces for her palace; British diplomats hauled it with them on their first-ever mission to Peking, audaciously planning to impress China with their china. But the life of Josiah Wedgwood is far richer than just his accomplishments in ceramics. He was a leader of the Industrial Revolution, a pioneering businessman, a cultural tastemaker, and a tireless scientific experimenter whose inventions made him a fellow of the Royal Society. He was also an ardent abolitionist, whose Emancipation Badge medallion—depicting an enslaved African and inscribed “Am I Not a Man and a Brother?”—became the most popular symbol of the antislavery movement on both sides of the Atlantic. And he did it all in the face of chronic disability and relentless pain: a childhood bout with smallpox eventually led to the amputation of his right leg.

As historian Tristram Hunt puts it in this lively, vivid biography, Wedgwood was the Steve Jobs of the eighteenth century: a difficult, brilliant, creative figure whose personal drive and extraordinary gifts changed the way we work and live. Drawing on a rich array of letters, journals, and historical documents, The Radical Potter brings us the story of a singular man, his dazzling contributions to design and innovation, and his remarkable global impact.

Tristram Hunt is the director of the Victoria & Albert Museum and one of Britain’s best-known historians. His previous books, which include Cities of Empire: The British Colonies and the Creation of the Urban World and Marx’s General: The Revolutionary Life of Friedrich Engels, have been published in more than a dozen languages. Until taking on the leadership of the V&A, he served as Member of Parliament for Stoke-on-Trent, the home of Wedgwood’s potteries. A senior lecturer in British history at Queen Mary University of London, he appears regularly on BBC radio and television.

“Utterly transporting and extremely cozy. . . As dishy a biography about dishes as can be imagined . . . One of the book’s many pleasures is its meticulous catalog of the china-buying public’s tastes, some whimsical and others bizarre or sinister.”
—The New York Times

“Easily the best account of that multifaceted genius.”
—The Times Literary Supplement

“Hunt performs the important task of telling the great potter’s story clearly and accessibly. . . . Wedgwood the man should be as famous as Wedgwood the brand.”
—The Observer

“Fabulously unputdownable . . . In parts it reads like a thriller.”
—The Telegraph

“Impassioned, wide-ranging . . . Hunt’s sympathetic, engaged and finely written biography makes it clear that Wedgwood was a one-off, and a genius.”
—The Spectator

“Wedgwood’s remarkable story has been told in many biographies over the years. The great contribution of The Radical Potter is to place him in the context of the rapid economic and social changes during his lifetime that helped make his success possible.”
—Financial Times

“Hunt is exquisitely alive to all the contradictions in Wedgwood’s achievements. . . . A rich portrait of the charismatic but contradictory man who made Georgian Britain the most stylish country in the world.”
—Mail on Sunday

“One of the achievements of Tristram Hunt’s biography is to bring into view the commercial and moral instincts of the man behind the powerhouse. . . . Wedgwood emerges from this book as a man of voracious interest in the world. Canny and determined, he had both strong beliefs and the adaptability that marks any great innovator.”
—Literary Review

“A captivating portrait of a remarkably innovative man.”
—Kirkus Reviews

“This is a remarkable and impassioned book. Josiah Wedgwood innovated across boundaries of technology and art and taste, commerce and scientific enquiry, and Tristram Hunt makes the powerful case for rediscovering his humane entrepreneurial spirit. The Radical Potter brings Wedgwood’s protean energy alive for a new generation and I loved it.”
—Edmund de Waal, author of The Hare with Amber Eyes