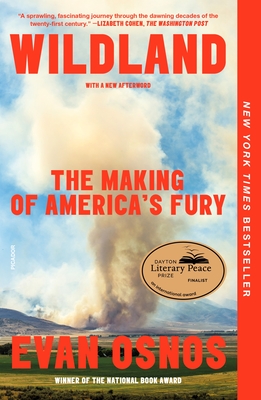 After a decade abroad, the National Book Award– and Pulitzer Prize–winning writer Evan Osnos returns to three places he has lived in the United States—Greenwich, CT; Clarksburg, WV; and Chicago, IL—to illuminate the origins of America’s political fury.

Evan Osnos moved to Washington, D.C., in 2013 after a decade away from the United States, first reporting from the Middle East before becoming the Beijing bureau chief at the Chicago Tribune and then the China correspondent for The New Yorker. While abroad, he often found himself making a case for his home country, urging the citizens of Egypt, Iraq, or China to trust that even though America had made grave mistakes throughout its history, it aspired to some foundational moral commitments: the rule of law, the power of truth, the right of equal opportunity for all. But when he returned to the United States, he found each of these principles under assault.

In search of an explanation for the crisis that reached an unsettling crescendo in 2020—a year of pandemic, civil unrest, and political turmoil—he focused on three places he knew firsthand: Greenwich, Connecticut; Clarksburg, West Virginia; and Chicago, Illinois. Reported over the course of six years, Wildland follows ordinary individuals as they navigate the varied landscapes of twenty-first-century America. Through their powerful, often poignant stories, Osnos traces the sources of America’s political dissolution. He finds answers in the rightward shift of the financial elite in Greenwich, in the collapse of social infrastructure and possibility in Clarksburg, and in the compounded effects of segregation and violence in Chicago. The truth about the state of the nation may be found not in the slogans of political leaders but in the intricate details of individual lives, and in the hidden connections between them. As Wildland weaves in and out of these personal stories, events in Washington occasionally intrude, like flames licking up on the horizon.

A dramatic, prescient examination of seismic changes in American politics and culture, Wildland is the story of a crucible, a period bounded by two shocks to America’s psyche, two assaults on the country’s sense of itself: the attacks of September 11, 2001, and the storming of the U.S. Capitol on January 6, 2021. Following the lives of everyday Americans in three cities and across two decades, Osnos illuminates the country in a startling light, revealing how we lost the moral confidence to see ourselves as larger than the sum of our parts.

Evan Osnos is a staff writer at The New Yorker, a CNN contributor, and a senior fellow at the Brookings Institution. Based in Washington D.C., he writes about politics and foreign affairs. He was the China Correspondent at The New Yorker from 2008 to 2013. His first book, Age of Ambition: Chasing Fortune, Truth, and Faith in the New China, won the 2014 National Book award and was a finalist for the Pulitzer Prize. In 2020, he published the international bestseller, Joe Biden: The Life, the Run, and What Matters Now, based on interviews with Biden, Barack Obama, and others. Prior to The New Yorker, Osnos worked as the Beijing bureau chief of the Chicago Tribune, where he contributed to a series that won the 2008 Pulitzer Prize for investigative reporting. Before his appointment in China, he worked in the Middle East, reporting mostly from Iraq. He and his wife, Sarabeth Berman, have two children.

"Stellar reporting . . . As an overview of a fractious ideological landscape, this skillful treatment is hard to beat. An elegant survey of the causes and effects of polarization in America." —Kirkus (starred review)

"Incisive . . . An engrossing and revealing look at how deeply connected yet far apart Americans are." —Publishers Weekly

"A sprawling, fascinating journey through the dawning decades of the 21st century . . . through acute observation, extensive interviewing and dogged research, Osnos weaves an intricate tapestry that gradually reveals how Americans experienced the last two decades." —Lizabeth Cohen, The Washington Post

"What makes Wildland such a fine book is not just the sense of divorcement he brings from his interlude abroad but the skills Osnos learned earlier in his career as a local reporter. It is a tour de force of old-style, shoe-leather reportage . . . Wildland tells the now familiar story of American polarization in an illuminating and often revelatory way." —Nick Bryant, Foreign Policy

"One of the books of the year . . . Wildland by The New Yorker's Evan Osnos draws the backstory to America's rage through deep reporting and 'thousands of hours of conversations' in three places he lived before D.C." —Axios

"A book rich with local history, sociological data and detailed portraits of people from various walks of life . . . It may be the plain facts assembled in Wildland that are needed, more than any encapsulating argument, to penetrate the apathy and nostalgia of the nation’s moderates—and offer a more productive channel to some of the furious.” —Louis Amis, The Times Literary Supplement

"Osnos offers the most personal and the most powerful description yet of a country 'so far out of balance that it [has] lost its center of gravity' . . . My hope is that everyone who reads this great book will be enraged enough to redouble their efforts to undo the damage the greedy have wrought, and to take back America for its decent citizens, once and for all." —Charles Kaiser, The Guardian

“Diligent and deeply researched . . . Osnos offers intimate portraits of the men and women in the three communities on his radar . . . Wildland is written in first person, which often gives the book a satisfying immediacy . . . Osnos himself seems too driven, too idealistic to give up on the America that he once promoted on his travels abroad. But as he makes painfully clear in Wildland, the underbrush is still parched, and a mere ember could set it ablaze.” —James S. Hirsch, Boston Globe

"The title of Evan Osnos' fine book, Wildland, is also its guiding metaphor. Wildland is land so desiccated that a spark can turn it into an uncontrollable wildfire. Even if the danger is known, a spark will eventually come, and then the conflagration." —Angus Deaton, The New York Times Book Review

"Evan Osnos' Wildland is a reportorial tour de force, describing the kaleidoscopic changes that threaten to cause America to come apart at the seams. He deftly connects the dots between the hedge-fund billionaires of Greenwich, Connecticut, the opioid-soaked towns of Appalachia, and the gun-heavy gangs of Chicago. By turning his trained eye as a former foreign correspondent on his own country, Osnos paints an indelible picture that is heart-rending, appalling and hard to put down." —Jane Mayer, chief Washington correspondent for The New Yorker and author of Dark Money: The Hidden History of the Billionaires Behind the Rise of the Radical Right

"Visionary in scope, compassionate in procedure, Wildland brilliantly transmutes our national chaos into absorbing narrative order. Evan Osnos has penned a definitive portrait of what we have allowed ourselves to become: a nation reaping the harvest that long negligence has sown." —Ayad Akhtar, author of Homeland Elegies

“In this richly reported, beautifully written book, Evan Osnos chronicles two decades of American anger, fury, and political dysfunction. He shows how, from the 9/11 attacks to the January 6th siege of the Capitol, a culture of fear and greed has taken hold, leading to endless war, pervasive mistrust, and the unravelling of the civic project. Osnos gives us a riveting tale of dark times, told with a pathos and humanity that prompts hope of something better.” —Michael J. Sandel, author of The Tyranny of Merit: Can We Find the Common Good?