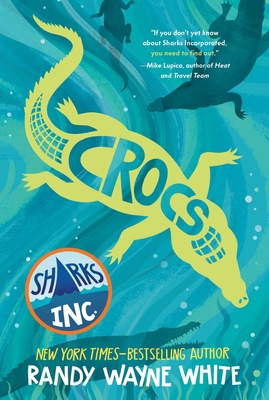 This is book number 3 in the Sharks Incorporated series.

The trio of brave friends who make up Sharks, Inc.—Luke, Maribel and Sabina—dive into a crocodile-filled adventure in Crocs, the third book in bestselling author Randy Wayne White’s Sharks Incorporated series.

Marine biologist Doc Ford has a new mission for Sharks Inc.: visit Sanibel Island’s remote Bone Field to find a wild orange tree that's survived a disease destroying Florida’s citrus. There, the members of Sharks Incorporated find oranges unlike any they’ve ever seen, but can’t find the tree Doc needs. Worse, the area is protected by a massive saltwater crocodile.

What the team doesn’t expect is to meet a reclusive woman who threatens to call the police if they trespass on her land again. Reluctant to give up, the trio learns she needs help. When she was young, the woman found King Calusa's grave. Now, she believes the ghost of the dead king, who was beheaded by Spanish explorers 500 years ago, is haunting her.

To uncover the truth, the kids return to the Bone Field. The thousand-pound crocodile is determined to protect its hatchlings, but crocs turn out to be the least of their worries. The intrepid trio discovers the woman’s wealthy neighbor is selling illegal reptiles—and he knows the secret of the dead king’s missing gold medallion.

Randy Wayne White is the New York Times bestselling and award-winning author of the Doc Ford series. In 2011, White was named a Florida Literary Legend by the Florida Heritage Society. A fishing and nature enthusiast, he has also written extensively for National Geographic Adventure, Men's Journal, Playboy and Men's Health. He lives on Sanibel Island, Florida, where he was a light-tackle fishing guide for many years, and spends much of his free time windsurfing, playing baseball, and hanging out at Doc Ford's Rum Bar & Grille. Sharks Incorporated is his middle grade series, including Fins and Stingers.

Praise for Stingers
"Something for everyone but especially fans of fast-paced eco-fiction." - Kirkus

"Full of facts about wildlife and preservation and survival tips, all infused with an appreciation and respect for local habitats." - Booklist

Praise for Fins
"Kids who enjoy adventure, science and sharks will be hooked by this swashbuckling story." - Tampa Bay Times

"[Fins] examines how a difficult past can give strength and shape an intentional present.This well-paced, exciting series opener will keep readers on their toes." - Kirkus

"Give to readers looking for science-based mysteries." - Booklist

“Filled with scoundrels, humor, sharks, intrepid kids, and a surprise ending all wrapped around an environmental theme. Prepare yourself for a fast boatload of fun!” - Robert F. Kennedy, Jr.