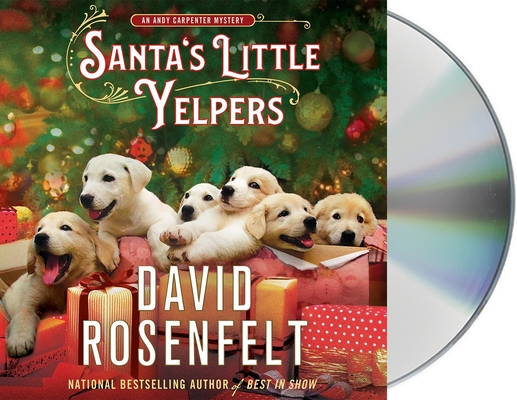 This is book number 26 in the An Andy Carpenter Novel series.

"Listening to Grover Gardner narrating a David Rosenfelt novel is like sliding into favorite slippers at the end of a long day: One feels the joyful gratification of a perfect fit." —AudioFile Magazine on Bark of Night

'Tis the season in Paterson, New Jersey: Lawyer Andy Carpenter and his golden retriever, Tara, are surrounded by holiday cheer. It’s even spread to the Tara Foundation. The dog rescue organization, not used to having puppies, has their hands full with a recent litter. Eight puppies are a lot to handle, and Andy is relieved when his co-worker Chris Myers agrees to foster them.

Myers, a newer employee at the Tara Foundation, did time for a crime he swears he didn’t commit. When Myers discovers a key witness against him lied on the stand, he goes to Andy to ask for representation in getting the conviction overturned. Myers thinks they can have this wrapped up by Christmas, no problem.

But when the witness is murdered, and Myers is arrested for the crime, things go from bad to worse. Suddenly, it’s all elves on deck to make a list and check it twice, so they can prove Myers is innocent.

Grover Gardner has recorded more than 650 audiobooks since beginning his career in 1981.  He's been named one of the "Best Voices of the Century" as well as a "Golden Voice" by AudioFile magazine.  Gardner has garnered over 20 AudioFile Earphones Awards and is the recipient of an Audio Publishers Association Audie Award, as well as a three-time finalist.  In 2005, Publishers Weekly deemed him "Audiobook Narrator of the Year."

Gardner has also narrated hundreds of audiobooks under the names Tom Parker and Alexander Adams.  Among his many titles are Marcus Sakey's At the City's Edge, as well as Star Wars: The Phantom Menace, Mark Twain's The Adventures of Tom Sawyer, and John Irving's The Cider House Rules.  Gardner studied Theater and Art History at Rollins College and received a Master's degree in Acting from George Washington University.  He lives in Oregon with his significant other and daughter.