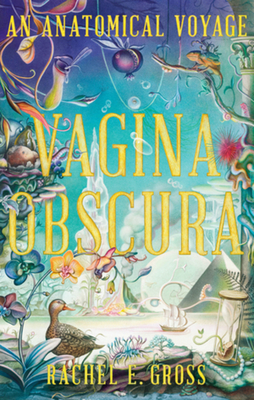 Shortlisted for the 2023 Andrew Carnegie Medal for Excellence in Nonfiction

A Science Friday Best Science Book to Read This Summer

A myth-busting voyage into the female body.

A camera obscura reflects the world back but dimmer and inverted. Similarly, science has long viewed woman through a warped lens, one focused narrowly on her capacity for reproduction. As a result, there exists a vast knowledge gap when it comes to what we know about half of the bodies on the planet.

That is finally changing. Today, a new generation of researchers is turning its gaze to the organs traditionally bound up in baby-making—the uterus, ovaries, and vagina—and illuminating them as part of a dynamic, resilient, and ever-changing whole. Welcome to Vagina Obscura, an odyssey into a woman’s body from a fresh perspective, ushering in a whole new cast of characters.

In Boston, a pair of biologists are growing artificial ovaries to counter the cascading health effects of menopause. In Melbourne, a urologist remaps the clitoris to fill in crucial gaps in female sexual anatomy. Given unparalleled access to labs and the latest research, journalist Rachel E. Gross takes readers on a scientific journey to the center of a wonderous world where the uterus regrows itself, ovaries pump out fresh eggs, and the clitoris pulses beneath the surface like a shimmering pyramid of nerves.

This paradigm shift is made possible by the growing understanding that sex and gender are not binary; we all share the same universal body plan and origin in the womb. That’s why insights into the vaginal microbiome, ovarian stem cells, and the biology of menstruation don’t mean only a better understanding of female bodies, but a better understanding of male, non-binary, transgender, and intersex bodies—in other words, all bodies.

By turns funny, lyrical, incisive, and shocking, Vagina Obscura is a powerful testament to how the landscape of human knowledge can be rewritten to better serve everyone.

Through her seamless storytelling and meticulous research, Rachel Gross shows how long we have misunderstood the bodies of half the people who have ever lived, how much we still have to learn, and how wondrous and rewarding that quest can be. Vagina Obscura is science writing at its finest—revelatory, wry, consequential, necessary, and incredibly hard to put down.

Vagina Obscura is a marvel of a book—lyrical, compassionate, infuriating, insightful, and wise. Rachel E. Gross's exploration of the history, science, and politics of female anatomy should be read by women, men, and everybody seeking to be smarter about who we really are.

Rachel E. Gross’s mesmerizing and often humorous Vagina Obscura vividly uncovers the scientific and popular biases that have colluded to stem our knowledge about 'down there.' Gross brilliantly investigates questions regarding sex, sexuality, and reproduction that have been hidden, made shameful, or just never asked.

— Elizabeth Reis, author of Bodies in Doubt: An American History of Intersex

With the perfect mix of verve and nerve, clarity and composure, Rachel Gross finally gives this organ system its due. I loved every fold and crevice of this book.
— Florence Williams, author of Breasts: An Unnatural History

Well-researched and beautifully told, this story of the vagina exposes an alarming lack of scientific curiosity about female genitals across species and centuries. But its brilliance lies in the revolution it heralds. A gripping read that should inspire significant change in science and society.
— Gabrielle Jackson, author of Pain and Prejudice

The vagina is having a much-belated moment, and thanks to Rachel E. Gross, now so are the ovaries, clitoris, and uterus. In Vagina Obscura, Gross clears away the linguistic and scientific shroud from the least investigated and most misunderstood structures in the human body and tells their story deftly and beautifully.

This is something about our own bodies that are so often treated as mysterious and unknown when they’re not unknown. We actually know quite a bit. The topic of this book is relevant to everybody.
— Riley Black - Science Friday

Vagina Obscura should cause a revolution in how we think about the vagina.

In Vagina Obscura, Gross looks...at misguided ideas about the clitoris, at the incredible regenerative power of the uterus, at the function of the human body itself. Full of historical accounts and deep reporting, Gross’ book gives stories about vulvas the care and attention they deserve.

A lively debut with a fresh, informative examination of women’s entire reproductive system, melding medical history—beginning in Hippocrates’ Greece—with a wide range of interviews and biological sleuthing in research laboratories all over the world... An eye-opening biological journey.
— Kirkus

This book is what we’ve been waiting for.
— Francesca Brown - Stylist

[An] engaging and endlessly fascinating debut… Vagina Obscura is impressive in its scope and thrilling in the hope it offers to those whose bodies have previously been overlooked.
— Bookpage (starred review)