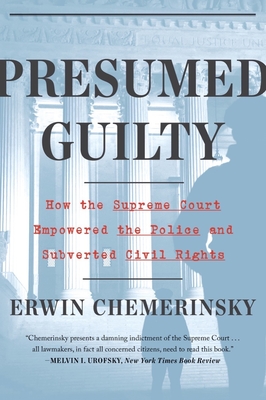 An unprecedented work of civil rights and legal history, Presumed Guilty reveals how the Supreme Court has enabled racist policing and sanctioned law enforcement excesses through its decisions over the last half-century.

Police are nine times more likely to kill African-American men than they are other Americans—in fact, nearly one in every thousand will die at the hands, or under the knee, of an officer. As eminent constitutional scholar Erwin Chemerinsky powerfully argues, this is no accident, but the horrific result of an elaborate body of doctrines that allow the police and, crucially, the courts to presume that suspects—especially people of color—are guilty before being charged.


Today in the United States, much attention is focused on the enormous problems of police violence and racism in law enforcement. Too often, though, that attention fails to place the blame where it most belongs, on the courts, and specifically, on the Supreme Court. A “smoking gun” of civil rights research, Presumed Guilty presents a groundbreaking, decades-long history of judicial failure in America, revealing how the Supreme Court has enabled racist practices, including profiling and intimidation, and legitimated gross law enforcement excesses that disproportionately affect people of color.

For the greater part of its existence, Chemerinsky shows, deference to and empowerment of the police have been the modi operandi of the Supreme Court. From its conception in the late eighteenth century until the Warren Court in 1953, the Supreme Court rarely ruled against the police, and then only when police conduct was truly shocking. Animating seminal cases and justices from the Court’s history, Chemerinsky—who has himself litigated cases dealing with police misconduct for decades—shows how the Court has time and again refused to impose constitutional checks on police, all the while deliberately gutting remedies Americans might use to challenge police misconduct.

Finally, in an unprecedented series of landmark rulings in the mid-1950s and 1960s, the pro-defendant Warren Court imposed significant constitutional limits on policing. Yet as Chemerinsky demonstrates, the Warren Court was but a brief historical aberration, a fleeting liberal era that ultimately concluded with Nixon’s presidency and the ascendance of conservative and “originalist” justices, whose rulings—in Terry v. Ohio (1968), City of Los Angeles v. Lyons (1983), and Whren v. United States (1996), among other cases—have sanctioned stop-and-frisks, limited suits to reform police departments, and even abetted the use of lethal chokeholds.

Written with a lawyer’s knowledge and experience, Presumed Guilty definitively proves that an approach to policing that continues to exalt “Dirty Harry” can be transformed only by a robust court system committed to civil rights. In the tradition of Richard Rothstein’s The Color of Law, Presumed Guilty is a necessary intervention into the roiling national debates over racial inequality and reform, creating a history where none was before—and promising to transform our understanding of the systems that enable police brutality.

Erwin Chemerinsky is the dean of the University of California, Berkeley, School of Law. The author of The Conservative Assault on the Constitution and The Case Against the Supreme Court, among many other works, he lives in Oakland, California.

Stunning... Chemerinsky presents a damning indictment of the Supreme Court... As Chemerinsky declares, the court’s record 'from 1986 through the present and likely for years to come, can easily be summarized: ‘The police almost always win....' Aside from the fact that he writes well, Chemerinsky... is also an experienced advocate, having appeared before the court on many occasions, and also having served as a consultant to those police forces who either by choice or necessity have tried to overhaul their practices. He bolsters his argument with examples from his own experiences, and his telling of the cases always starts with the people involved... Chemerinsky details a number of ways state and local governments can and should reform police procedures without having to go to court. Whether the furor unleashed by Black Lives Matter will lead to state and city governments reforming their police departments is yet to be seen, but all lawmakers, in fact all concerned citizens, need to read this book. It is an eloquent and damning indictment not only of horrific police practices, but also of the justices who condoned them and continue to do so.
— Melvin I. Urofsky - New York Times Book Review

Opens our eyes to a critical reason that we continue to have problems of police violence and racism in law enforcement... Chemerinsky masterfully presents his arguments by tying together current events with major Supreme Court decisions that laid the foundation for those conflicts... My criminal procedure students know this to be true. They read another book written by Chemerinsky and his co-author that goes through the cases. In the future, they may be assigned this one as well... Years from now, Americans may ask, “Did anyone stand up to the Supreme Court and pull back the curtain?” The answer will be “Yes.” Chemerinsky did just that. Now, it is time for all of us to take a good look.
— Laurie L. Levenson - Los Angeles Review of Books

One of the foremost U.S. Constitutional scholars and Supreme Court analysts, Chemerinsky (dean, Univ. of California, Berkeley, Sch. of Law; The Conservative Assault on the Constitution) cogently demonstrates in this book that the court bears much of the blame for police violence and racism in U.S. law enforcement.... An insightful primer for understanding the judicial decisions that support the United States’ prevailing authoritarian, paramilitary, racist approach to policing.... A thoughtful, provocative, and instructive must-read for anyone concerned with justice and domestic tranquility.

The veteran legal affairs expert offers a powerful attack on a judiciary committed to advancing the police state . . . [Chemerinsky] suggests that because the Supreme Court will not restrain the police, state courts can and should invoke state constitutions in order to do so.' Necessary reading for civil libertarians, public defenders, and activists.
— Kirkus Reviews