Rebels at Sea: Privateering in the American Revolution (Paperback) 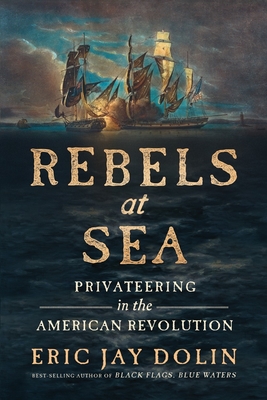 The bestselling author of Black Flags, Blue Waters reclaims the daring freelance sailors who proved essential to the winning of the Revolutionary War.

The heroic story of the founding of the U.S. Navy during the Revolution has been told many times, yet largely missing from maritime histories of America’s first war is the ragtag fleet of private vessels that truly revealed the new nation’s character—above all, its ambition and entrepreneurial ethos.

In Rebels at Sea, best-selling historian Eric Jay Dolin corrects that significant omission, and contends that privateers, as they were called, were in fact critical to the American victory. Privateers were privately owned vessels, mostly refitted merchant ships, that were granted permission by the new government to seize British merchantmen and men of war. As Dolin stirringly demonstrates, at a time when the young Continental Navy numbered no more than about sixty vessels all told, privateers rushed to fill the gaps. Nearly 2,000 set sail over the course of the war, with tens of thousands of Americans serving on them and capturing some 1,800 British ships. Privateers came in all shapes and sizes, from twenty-five foot long whaleboats to full-rigged ships more than 100 feet long. Bristling with cannons, swivel guns, muskets, and pikes, they tormented their foes on the broad Atlantic and in bays and harbors on both sides of the ocean.

The men who owned the ships, as well as their captains and crew, would divide the profits of a successful cruise—and suffer all the more if their ship was captured or sunk, with privateersmen facing hellish conditions on British prison hulks, where they were treated not as enemy combatants but as pirates. Some Americans viewed them similarly, as cynical opportunists whose only aim was loot. Yet Dolin shows that privateersmen were as patriotic as their fellow Americans, and moreover that they greatly contributed to the war’s success: diverting critical British resources to protecting their shipping, playing a key role in bringing France into the war on the side of the United States, providing much-needed supplies at home, and bolstering the new nation’s confidence that it might actually defeat the most powerful military force in the world.

Creating an entirely new pantheon of Revolutionary heroes, Dolin reclaims such forgotten privateersmen as Captain Jonathan Haraden and Offin Boardman, putting their exploits, and sacrifices, at the very center of the conflict. Abounding in tales of daring maneuvers and deadly encounters, Rebels at Sea presents this nation’s first war as we have rarely seen it before.

Eric Jay Dolin is the best-selling author of numerous works in maritime history, including Black Flags, Blue Waters and Leviathan. A graduate of Brown, Yale, and MIT, he now lives in Marblehead, Massachusetts, with his family.

Eric Jay Dolin, the author of several books on early American seafaring, believes that these privateers have received short shrift in other histories of the Revolution. His thoroughly researched, engagingly written Rebels at Sea gives them their due . . . when a ship couldn’t outsail its foes, or when a potential prize resisted, a bloody action could ensue, and Rebels at Sea vividly recounts some of these battles, as vessels with evocative names such as Vengeance, Eagle and Defiance face off against the enemy . . . Dolin convincingly contends that the underappreciated ‘militia of the sea’ played a critical role in the colonies winning their independence, despite Britain’s ‘peculiar and sovereign authority upon the ocean.

Rebels at Sea is sure to be another successful addition to Dolin’s catalog. The narrative is fast-paced and exciting. . . . The work also has some stunning and colorful pictures, including paintings, maps and portraits. This ranks as one of the best books the Journal of the American Revolution has reviewed.

The author makes this solid work of scholarship the sort of book that starts a young person’s love of reading and interest in history. Dolin never loses the reader in his clear and concise prose.
— Robert S. Davis - New York Journal of Books

Rebels at Sea is a worthwhile addition to Eric Jay Dolin’s superb scholarly library of maritime works. . . . [it] is a broad and well-researched examination of the role of letter-of-marque vessels during the American Revolution. This new work is a very much welcome addition to Revolutionary War maritime history.

The bestselling maritime historian returns with a study of privateering activity during the Revolutionary War and its role in bolstering the Colonial cause . . . In this exciting narrative, Dolin, a 2020 Kirkus Prize finalist for A Furious Sky, demonstrates how privateering was a key element in America’s ability to secure independence . . . The author digs deep into the whole enterprise . . . In this characteristically well-researched history, Dolin describes the vital activities of two main types of privateers . . . The author also explores in fascinating detail the desperate circumstances of captured Americans aboard British prison ships . . . A thrilling, unique contribution to the literature on the American Revolution.

[A] spirited account . . . The book’s greatest strength are the up-close portraits of the sailors themselves . . . This is a well-researched and thoroughly entertaining tribute to men who ‘stepped forward and risked their lives to help make [the United States] a reality.'
— Publishers Weekly

Eric Jay Dolin is an excellent writer, straightforward with a style that keeps the book moving while thoroughly engaging the reader. Rebels at Sea is destined to become the starting place to understand the privateer war during the American Revolution.

Rebels at Sea gives readers not only an insight into the nature of privateering and all it involved, but it provides a good picture of the heroism, suffering, and sacrifices necessary in creating the United States.

There may be no better read for an American Revolution history lover this summer than Eric Jay Dolin‘s latest Rebels at Sea, a look at the forgotten role of the privateer during America’s battle for independence. . . . [It] presents a great introduction to this hidden corner of American history.

A compelling tale of patriots whose bravery was integral to America’s victory in the War of Independence, Rebels at Sea is highly recommended.

Rebels at Sea is captivating reading for those drawn to American and British history or armchair sailors seeking high seas adventure. It is also an important contribution to American Revolution literature.

Most naval history focuses on battles between national fleets, and so the swaggering history of the Revolution’s American privateers may have sailed past some readers. Eric Jay Dolin’s comprehensive effort helps correct that oversight. . . . [Rebels at Sea is] fascinating.

Eric Dolin majestically rectifies the oversight that the official canon of naval history in Britain and the United States virtually ignores privateers. . . . Eric Dolin’s Rebels At Sea is original, meticulously researched and connects one of the USA’s great missing links in understanding how the land of the free earned its liberty. Rebels At Sea is rich in stories, historical explanation and tales of derring-do – a new and refreshing take on how the West was won.