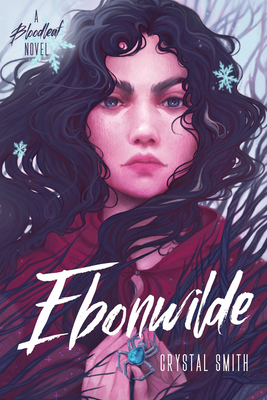 Get ready to be swept away, seduced, and swindled in the wickedly vicious third and final installment in the Bloodleaf series that Laura Sebastian called “enchanting, visceral, and twisty.”

When Aurelia awakens from her magic-induced sleep, it is to the face of a rescuer she didn’t expect, in a body she doesn’t understand, and into a world she no longer recognizes.

Desperate to know what happened to Conrad, Zan, and Kellan after the events at Greythorne Manor, Aurelia follows the threads they left behind straight into the forest. Suddenly she finds herself caught in a web of magic, intrigue, passion, and betrayal that stretches across centuries and ultimately reveals that Aurelia is the final piece of a deadly apocalyptic plan that is only days away.

All Aurelia wants is to reclaim her life and reunite with those she loved and lost; but with the end of the world looming, she’s forced to unravel the dark secrets of the distant past before she can get that chance.

With the fate of mankind on her shoulders, Aurelia must venture into the heart of the Ebonwilde and face the darkest parts of the forest—and of herself.

Ebonwilde is the thrilling conclusion to the epic Bloodleaf series, which Laura Sebastian called “a phantasmagorical wonder” and Sara Holland described as an “eerie, immersive, and fascinating” read.

Crystal Smith is a writer, photographer, and artist who developed an early love of storytelling in a family of voracious readers. She resides in Utah with her high school sweetheart husband and two lively sons. When she isn’t writing or creating, she can be found re-watching Jane Eyre or reading ghost stories with all the lights on. @crysrensmith.

Praise for BLOODLEAF:    “Enchanting, visceral, and twisty, BLOODLEAF is a phantasmagorical wonder that will keep you guessing until the very last page.” New York Times bestselling author of Ash Princess, Laura Sebastian     “Eerie, immersive, and fascinating, BLOODLEAF feels like a classic in the making. Readers will be pulled deep into Aurelia's world, and lose sleep alongside her as the deadly mysteries close in.” – Sarah Holland, New York Times bestselling author of Everless     “Smith weaves together mystery, adventure and a reimagined fairy tale in this bewitching debut. An irresistible, spellbinding story.” –Rebecca Ross, author of The Queen’s Rising  "BLOODLEAF has a good chance of becoming your next YA obsession.” –Entertainment Weekly    "The writing is strong and engaging...romance, danger, and magic make for a winning combination that will keep readers glued to the pages long after bedtime. A lovely, dark, and twisted fantasy for those of who have never quite outgrown fairy tales."–School and Library Journal   "Half-fantasy and half-murder mystery, this novel is a riveting read; Smith delicately plants seemingly insignificant details that become crucial later, and the plot is rife with surprising twists. The magic system is intricate and unique, and the headstrong main character proves again and again that she can make sacrifices to save her loved ones. In addition to the compelling story, deeper themes of religious corruption and variations on motherly love run through the book; the different interpretations of the religious systems between the two countries are particularly thought-provoking. This novel is a well-developed page-turner that will have fans of both the fantasy and mystery genres rushing to finish." –BCCB   "Debut author Smith explores the power of sacrifice in this darkly romantic reimagining of the Brothers Grimm’s “The Goose Girl.” Smith’s rich mythology and affecting love story...and subtly drawn characters illustrate the story’s interest in the difference between piety and goodness." --PW   "A multifaceted scheme, mistaken identity, and a simmering romance will keep readers riveted and dying to know how it all unfolds…. An excellent choice for fans of smart, independent female leads, intriguing fantasy worlds, and a race against the clock to defeat evil." –Booklist   "The plot is breathlessly fast, complete with creepy spirits, a satisfying romance, and complex but clear political twists and turns....Political, romantic, magical, timely, yet also traditionally appealing." –Kirkus