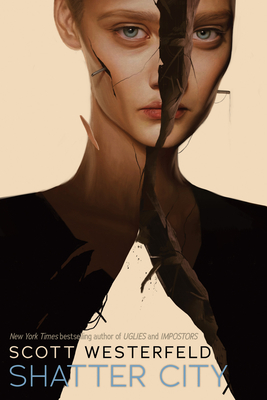 This is book number 2 in the Impostors series.

Cities at war. Identities stolen or hidden away. A love built on lies. In the second book of the New York Times bestselling Impostors series, nothing is certain and anything can be taken away.

When the world sees Frey, they think they see her twin sister, Rafi. Frey was raised to be Rafi's double, and now she's taken on the role . . . without anyone else knowing.

Her goal? To destroy the forces that created her.

But with the world watching and a rebellion rising, Frey is forced into a detour. Suddenly she is stranded on her own in Paz, a city where many of the citizens attempt to regulate their emotions through an interface on their arms. Paz is an easy place to get lost . . . and also an easy place to lose yourself.

As the city comes under a catastrophic attack, Frey must leave the shadows and enter the chaos of warfare -- because there is no other way for her to find her missing sister and have her revenge against her murderous father.

Scott Westerfeld is the #1 New York Times bestselling author of the Uglies series, which has been translated into 35 languages; the Leviathan series; Afterworlds; Horizon; and many other books for young readers. He was born in Texas and alternates summers between Sydney, Australia, and New York City.

"Fans of the original quartet will be delighted to see how much the world of Tally Youngblood has grown and expanded . . . Even if readers aren't familiar with the original series, they'll still enjoy this well-placed novel from start to finish . . . Westerfeld's many, many fans will line up for this return to the world of his uberpopular Uglies." -- Booklist

"Although set in the world of Uglies (2005), this work is accessible as an entry point. Impressive, immaculately plotted sci fi chock full of twists." -- Kirkus Reviews

"Themes such as environmental conservation and individual freedom deepen the story right up to its explosive finale, which will leave readers looking forward to the next installment." -- Publishers Weekly