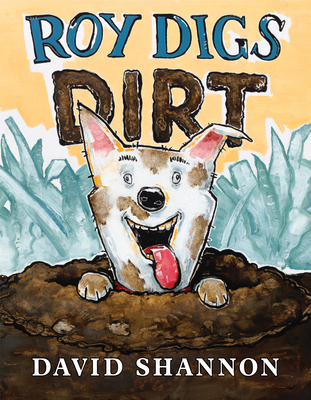 Woof! Meet Roy, an adorable white dog who is wild about digging, digging, digging in the dirt!
David Shannon's picture books are loved for their endearing characters and laugh-aloud humor, and Roy's charming naughtiness will remind readers of what they love about Shannon's No, David!, a bestselling Caldecott Honor Book about a boy with a nose for trouble.

Although it's a smelly task for those who have to constantly bathe him, Roy's happiness centers on his very favorite thing-dirt-and from sunrise to sunset, he burrows in it, rolls in it, and digs up buried treasures. There's terror in every terrier, and when Roy runs into the house after being sprayed by a skunk, he faces the dreaded bathtub. Readers will see themselves in Roy's childlike delight each time he makes the biggest mess ever.

David Shannon is the internationally acclaimed creator of more than 30 picture books, including No, David!, a Caldecott Honor Book and his second New York Times Best Illustrated Book of the Year, and four more David picture books. Shannon's bestsellers include A Bad Case of Stripes, Duck on a Bike, and Too Many Toys. His most recent book was the New York Times bestseller Grow Up, David!. He lives in Southern California with his family and Roy, their West Highland White Terrier.


Praise for No, David!:
A Caldecott Honor Book
A New York Times Best Illustrated Children's Book of the Year

* "In this ode to bad and boisterous little boys... this book is perfect for reading aloud. Children will relish the deliciously bad behavior and the warm and cuddly conclusion." -- School Library Journal, starred review

"The illustrations are wonderful, full of good-time trouble-making tomfoolery, borrowing on the energy of children's drawings and the determined strokes of their early attempts at lettering. David is a small, snaggle-toothed piehead whose mischief-for those who don't have to clean up after him-is nothing short of exhilarating." -- Kirkus Reviews

"Readers won't be able to resist taking a walk on the wild side with this little rascal, and may only secretly acknowledge how much of him they recognize in themselves." -- Publishers Weekly


Praise for Grow Up, David!:
"The illustrations capture both the emotional intensity of David's roller-coaster world and, in hilarious close-up tableaux, a series of brotherly tussles, pranks, domestic disasters, and goofy bids for attention... Nice to see you again, David!" -- Kirkus Reviews


Praise for Good Boy, Fergus!:
* "Shannon's mixed-media illustrations, in the style of his David books, crackle with personality. Fergus's expressions and poses will be both funny and familiar to dog lovers, and the predominantly close-up perspective offers an immediacy that makes readers feel included in every second of the tail-wagging action. Paws down, Fergus is one memorable pooch." -- Publishers Weekly, starred review


Praise for Duck on a Bike:
"Shannon serves up a sunny blend of humor and action in this delightful tale of a Duck who spies a red bicycle one day and gets 'a wild idea.'... Add to all this the abundant opportunity for youngsters to chime in with barnyard responses ('M-o-o-o'; 'Cluck! Cluck!'), and the result is one swell read-aloud, packed with freewheeling fun." -- Publishers Weekly


Praise for A Bad Case of Stripes:
"The pictures are probably enough to attract young browsers, and the book's irony and wealth of detail may even interest readers in higher grades." -- Booklist

"This very funny tale speaks to the challenge many kids face in choosing to act independently." -- School Library Journal