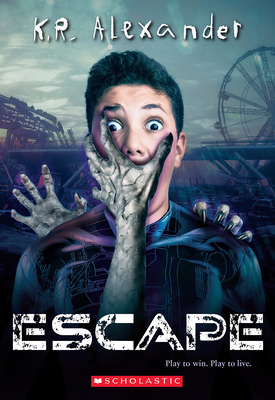 WESTWORLD meets CHARLIE AND THE CHOCOLATE FACTORY meets JURASSIC PARK, as kids win a chance to enter the place of their dreams -- and find that it quickly turns into a nightmare.

It's all anyone talks about, and it's all Cody dreams about. It's the biggest adventure park in the world, and it's more than mere rides and rollercoasters: At ESCAPE, you can do anything you want, be anyone you want, and there are no adults to tell you no.

Cody's a nobody, but for some reason he receives an invitation and the opportunity of a lifetime. At first, it's the most fun he's ever had. But after a few days, everything in the park starts to go haywire. One at a time, rides malfunction. Simulations turn deadly. His fantasy world glitches, and the games become races for survival. A voice comes over the intercoms, then-ESCAPE was never a theme park for the rich and famous. It was a place for punishment. They have less than a week to escape from the park before it floods. Only five kids will be allowed to leave.

It started out as a fight to get to the coolest rides. Now, they have to fight to survive.

K. R. Alexander is the pseudonym for author Alex R. Kahler.As K. R., he writes creepy middle grade books for brave young readers. As Alex -- his actual first name -- he writes fantasy novels for adults and teens. In both cases, he loves writing fiction drawn from true life experiences. (But this book can’t be real . . . can it?)Alex has traveled the world collecting strange and fascinating tales, from the misty moors of Scotland to the humid jungles of Hawaii. He is always on the move, as he believes there is much more to life than what meets the eye.You can learn more about his travels and other books, including The Collector, The Fear Zone, and the Scare Me series, on his website: cursedlibrary.comHe looks forward to scaring you again . . . soon.

Praise for The Collector:

"A good introduction to supernatural horror for middle-grade readers, with a suspenseful plot, sinister imagery of possessed dolls, and sympathetic characters." -- Booklist

"Delightfully spooky-readers may want to avoid dolls for a while after finishing this one." -- Kirkus Reviews