It's Not Me, It's You (Point Paperbacks) (Paperback) 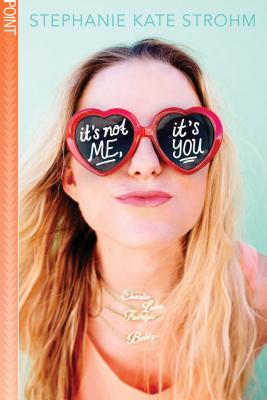 By Stephanie Kate Strohm
$9.99
On Our Shelves Now

This repackage of Strohm's laugh-out-loud book, with an all-new cover, is part of the launch season of Point Paperbacks, a line of highly commercial YA contemporary titles.
Avery Dennis is a high school senior and one of the most popular girls in her class. But a majorly public breakup with the guy she's been dating causes some disastrous waves. It is right before prom and Avery no longer has the perfect date. She runs the prom committee -- how could she not show up with somebody?

Post-breakup, Avery gets to thinking about all of the guys that she has ever dated. How come none of those relationships ever worked out? Could it be her fault? Avery decides to investigate. In history class she's learning about this method of record-keeping called "oral history" and she has a report due. So Avery decides to go directly to the source. Avery tracks down all of the guys she's ever dated, and uses that information, along with the thoughts of her friends, family, and even teachers to compile a total account of her dating history.

Avery discovers some surprises about herself and the guys she's spent time with just in time for prom night!

Stephanie Kate Strohm is the author of It's Not Me, It's You; The Taming of the Drew; Pilgrims Don't Wear Pink; Confederates Don't Wear Couture; and Prince in Disguise. She grew up on the Connecticut coast, where a steady diet of Little House on the Prairie turned her into a history nerd at an early age. After graduating with a joint major in theater and history from Middlebury College, she acted her way around the country, performing in more than 25 states. Although she was born in New York, she currently lives in Chicago, and doesn't discriminate against any type of pizza. When she's not writing, she loves baking, walking her dog Lorelei, taking dance cardio classes too seriously, and playing board games with her husband.