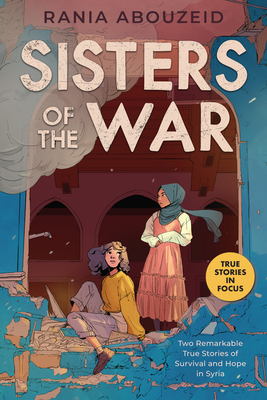 This NPR Best Book of 2020 is an extraordinary true account of the enormous tragedy of the Syrian civil conflict.

Since the revolution-turned-civil war in Syria began in 2011, over 500,000 civilians have been killed and more than 12 million Syrians have been displaced. Rania Abouzeid, one of the foremost journalists on the topic, follows two pairs of sisters from opposite sides of the conflict to give readers a firsthand glimpse of the turmoil and devastation this strife has wrought. Sunni Muslim Ruha and her younger sister Alaa withstand constant attacks by the Syrian government in rebel-held territory. Alawite sisters Hanin and Jawa try to carry on as normal in the police state of regime-held Syria. The girls grow up in a world where nightly bombings are routine and shrapnel counts as toys. They bear witness to arrests, killings, demolished homes, and further atrocities most adults could not even imagine. Still, war does not dampen their sense of hope.

Through the stories of Ruha and Alaa and Hanin and Jawa, Abouzeid presents a clear-eyed and page-turning account of the complex conditions in Syria leading to the onset of the harrowing conflict. With Abouzeid's careful attention and remarkable reporting, she crafts an incredibly empathetic and nuanced narrative of the Syrian civil war, and the promise of progress these young people still embody.

Rania Abouzeid has written for TIME, The New Yorker, National Geographic, Politico, The Guardian, the Los Angeles Times, and a host of other publications. As a journalist with many years of experience in the Middle East, Rania Abouzeid is exceedingly familiar with the history of the region, how it impacts current events and how social and cultural conditions shape today's news. She is a print and television journalist, fluent in Arabic, who has been honored with numerous awards, including the 2015 Michael Kelly Award, the 2014 George Polk Award for Foreign Reporting, and the 2013 Kurt Schork Award in International Journalism. Rania's first book is No Turning Back: Life, Loss, and Hope in Wartime Syria. She lives in Beirut and can be found online at raniaabouzeid.com.

Praise for Sisters of the War:

"An important, incredibly gripping account of two families and two sets of sisters who were affected by the civil war in Syria." –School Library Journal

Praise and awards for No Turning Back: Life, Loss, and Hope in Wartime Syria:

Finalist for the Lionel Gelber Prize

Finalist for the RSL Ondaatje Prize

Finalist for the Helen Bernstein Book Award for Excellence in Journalism

"Abouzeid's remarkable journalistic and literary work has given us, at last, a book worthy of the enormous tragedy that is Syria." -- New York Times Book Review

"Harrowing reporting from the front lines of the civil war in Syria." -- Kirkus Reviews