The Tryout: A Graphic Novel (Paperback) 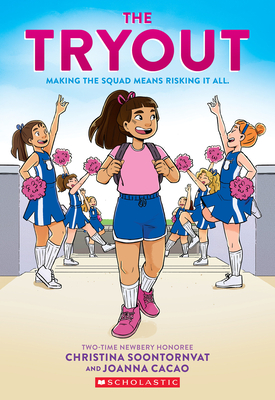 “An utterly captivating graphic memoir about middle school, competition, friendships, and growing up Asian American in a mostly white community. This is a book every middle grade reader (and many adults) will want to read over and over.”
— Chris Abouzeid, Belmont Books, Belmont, MA

This pitch perfect graphic memoir about courage and competition, friendship and belonging is perfect for fans of Smile, New Kid, Rollergirl, and Real Friends.

When cheerleading tryouts are announced, Christina and her best friend, Megan, literally jump at the chance to join the squad. As two of the only kids of color in the school, they have always yearned to fit in—and the middle school cheerleaders are popular and accepted by everyone. But will the girls survive the terrifying tryouts, with their whole grade watching? And will their friendship withstand the pressures of competition?

Christina Soontornvat is the author of the Newbery Honor books A Wish in the Dark and All Thirteen, which also won the Kirkus Prize and a Sibert Honor distinction. She is also the author of Scholastic’s beloved fantasy series Diary of an Ice Princess and several picture books including To Change a Planet illustrated by Rahele Jomepour Bell, which received a starred review in Kirkus. Christina holds a B.S. in Mechanical Engineering and a master’s degree in Science Education. She spent a decade working in the science museum field, where she designed programs and exhibits to get kids excited about science and STEM. Christina lives in Austin, Texas, with her husband, two young children, and one old cat. You can learn more about her work at soontornvat.com.
Joanna Cacao is a Canadian-Filipino artist and illustrator who lives in Winnipeg with her Pomeranian, Danny. She loves working on magical and fantastical stories. Growing up in front of a TV, Joanna immediately became obsessed with any show or film that had a great story and set of characters. Her favorite shows consist of Avatar: The Last Airbender, Downton Abbey, and Gravity Falls. Her biggest influences come from various manga, as well as Ghibli and Disney films. She has a background in 3D Animation, and has self-published a queer webcomic: Toxic For You.

“The plot alone is enough to keep young readers flipping the pages. (I held my breath when the final roster of cheerleaders was announced.) But like all good books about growing pains, this captivating middle-grade gem contains many moments that will resonate with young and old alike.” — The New York Times Book Review

★ “This superlative graphic memoir is a funny, relatable, and genuine story of friendship and belonging. . . . The jokes, daydreams, and quips are delightful without overshadowing or diminishing the impact of [Christina’s] experiences with racism and exclusion. The attractive, expressive illustrations feature clean lines and bright colors. A funny, painfully honest look at a middle schooler finding her way.” — Kirkus Reviews, starred review

★ “Soontornvat’s lived and emotional experiences come through loud and clear….Cacao’s manga-inspired artwork captures every nuanced emotion. . . . Readers of this empowering graphic memoir will want to invite Christina to sit at their table to share food, stories, and the secrets to self-confidence.” — School Library Journal, starred review

★ “Soontornvat's memoir is cringe-worthy in the best possible way. . . . brought to life with gorgeous illustration from self-taught comic artist Joanna Cacao. . . . The Tryout is an inspiring and insightful graphic memoir for anyone who simply wants to fit in.” — Shelf Awareness, starred review

"The art is delightfully expressive, and the characters’ personalities shine in each panel. A standout addition to any graphic autobiography collection." — Booklist

“The Tryout beautifully captures the struggles and pressures of wanting to fit in. As a fellow Thai-American, Christina brought a tear to my eye.” — Dan Santat, New York Times bestselling creator of The Aquanaut