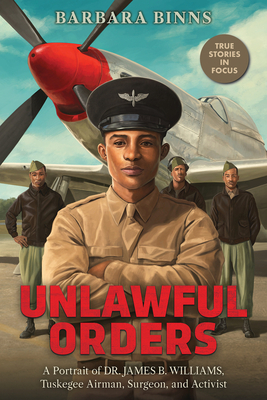 Barbara Binns presents the inspiring story of one man in his struggle for racial equality in the field of battle and the field of medicine.

The Tuskegee Airmen heroically fought for the right to be officers of the US military so that they might participate in World War II by flying overseas to help defeat fascism. However, after winning that battle, they faced their next great challenge at Freeman Field, Iowa, where racist white officers barred them from entering the prestigious Officers' Club that their rank promised them. The Freeman Field Mutiny, as it became known, would eventually lead to the desegregation of the US armed forces, forever changing the course of American history and race relations.

One Black officer who refused to give in to the bigotry at Freeman Field was James Buchanan "JB" Williams. JB grew up the son of sharecroppers, but his loving family and insuppressible intellect drove him to push boundaries placed on Black Americans in the early twentieth century. JB's devotion to the betterment of others took him from the classroom where he learned to be a doctor, to serving as a medic in the US military and eventually joining the elite Tuskegee Airmen, where he fought to change the minds of all who believed Black men couldn't make good soldiers. But JB's greatest contribution came in his role as doctor and Civil Rights activist after the war, where he continued to push past injustices placed on Black Americans.

Critically acclaimed author Barbara Binns tells the story of one man's remarkable life, and in doing so, explores the trials of the brave Black freedom fighters who defended the world against racism and bigotry, both on the front lines and at home.

Barbara Binns is an African American author of contemporary, multicultural stories. She was born and raised on Chicago’s south side. She writes to attract and inspire readers with stories of “real boys growing into real men…and the people who love them.”

Her books for middle grade and young adult readers include Pull, Being God, and Courage. Her writing has won an Oregon 2010 Readers Choice award and was chosen for the 2012 YALSA Quick Picks for Reluctant Readers list. In addition to writing, she volunteers with groups from students to senior citizens, and gives lectures and workshops to both experienced and aspiring authors.As the eldest of five children, Barbara learned responsibility at an early age. Her eclectic career path includes work as a clinical chemist at the University of Chicago Hospitals, as a computer analyst for AT&T, and now as an author for her readers. She finds writing for young people an exercise in self-discipline and the perfect follow-up to her life as an adoptive parent and cancer survivor. She lives and writes in a suburb of Chicago. You can find Barbara on Twitter at @barbarabinns, Facebook at @allthecolorsoflove, or on her website at babinns.com.