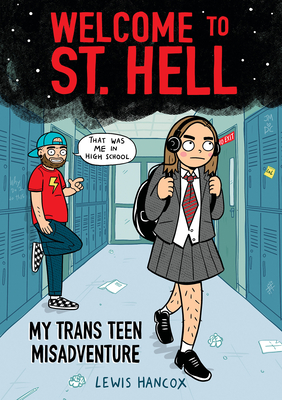 A groundbreaking memoir about being a trans teen, in the vein of FUN HOME and FLAMER... and at the same time entirely its own.

In WELCOME TO ST. HELL, author-illustrator Lewis Hancox takes readers on the hilarious, heartbreaking, and healing path he took to make it past trauma, confusion, hurt, and dubious fashion choices in order to become the man he was meant to be. It's a remarkable, groundbreaking graphic memoir from an unmistakably bold new voice in comics.

Lewis Hancox is a writer, illustrator, and filmmaker from North West UK. Mainly known for his online characters British Mum and Prinny Queen, he's built a committed following and regularly produces viral comedy videos. He has been featured in the Channel 4 series My Transsexual Summer and co-created an ongoing film project about trans people called My Genderation. You can find him on Instagram and TikTok at @lewishancoxfilms, on Twitter at @LewisHancox, and on YouTube at Lewis Hancox. As a longtime fan of cartoons and comics, he's proud to have created Welcome to St. Hell, his first graphic memoir.