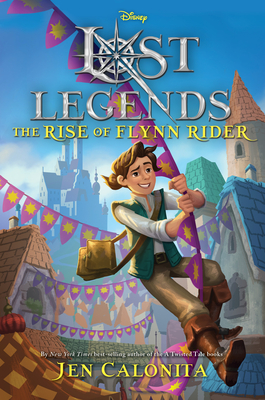 The first book in a new middle grade series that features the adventures of Disney’s most lovable roguish heroes as kids!

Before he was a legendary thief, he was just a boy named Eugene..."hi, how ya doin'?"

Twelve-year-old Eugene Fitzherbert needs a plan. He loves Miss Clare and the boys at the orphanage, but he's not a little kid anymore. He can't spend his days getting into mischief and acting out his favorite passages from the Flynnigan Rider novels. In his imagination, he is that daring rogue Flynn Rider, and his best friend, Arnie, is famous thief Lance Strongbow, who steals from the rich and gives to the poor. Even though Eugene knows it's just a fun game, he can't help but wish there was more for him out there. Travel. Riches. And maybe, just maybe, his parents.

So when a traveling circus comes to the kingdom promising a life of excitement, brotherhood, and unimaginable treasure, Eugene and Arnie see it as the start of their great adventure. But it soon becomes clear that there’s more to this ragtag crew than meets the eye, and it'll take new heroes—namely, Flynn Rider and Lance Strongbow—to save the day.

Jen Calonita is the author of the New York Times best-selling A Twisted Tale series, and the award-winning Secrets of My Hollywood Life and Fairy Tale Reform School series. She lives in New York with her husband, two boys, and two chihuahuas named Captain Jack Sparrow and Ben Kenobi. A huge Disney fan, Jen dreams of moving the whole family into Cinderella’s castle at Walt Disney World. Visit her online at www.jencalonitaonline.com and Twitter @jencalonita.

Praise for Lost Legends: Diamond in the Rough:

"[A] briskly paced, suspenseful, action- and magic-filled adventure.... If not a carpet ride, an entertaining journey readers will appreciate."—Kirkus