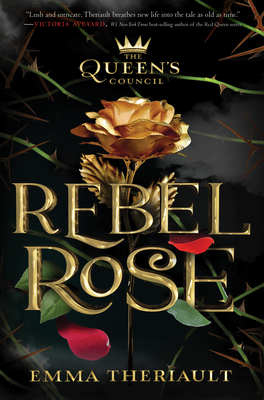 Torn between two worlds, neither of which she truly belongs...

Happily ever after is only the beginning as Belle takes on the responsibility of becoming queen and learns to balance duty, love, and sacrifice, all while navigating dark political intrigue—and a touch of magic.

It’s 1789, and France is on the brink of revolution. Belle has broken the enchantress’s curse, restoring the Beast to his human form and bringing life back to their castle in the principality of Aveyon. But in Paris, the fires of change are burning, and it’s only a matter of time before the rebellion arrives on their doorstep.

Not so very long ago, Belle dreamed of leaving her provincial home for a life of adventure. Now she finds herself living in a lush palace, torn between her past as a commoner and her future as royalty. While Belle grapples with her newfound position, there are those who would do anything to keep her from power.

When she stumbles across a magic mirror that holds a dire warning, Belle wants nothing more than to ignore the mysterious voice calling her to accept a crown she never desired. But violent factions of the revolution may already be lurking within her own castle, and doing nothing would endanger everything she holds dear. With the fate of her country, her love, and her life at stake, Belle must decide if she is ready to embrace her own strength--and the magic that ties her to so many female rulers before her--to become the queen she is meant to be.

Rebel Rose continues the story of one of Disney's most beloved classic Beauty and the Beast. It is the first in the Queen’s Council series, an empowering fairy tale reimagining of the Disney Princesses—and the real history behind their stories—like you’ve never seen before.

Emma Theriault was born and raised in Ottawa, the capital city of Canada, and thus has a penchant for gothic revival architecture and a constant craving for Beavertails. She has been everything from an enthusiastic bookseller (who once sold a book to Prime Minister Trudeau) to a purveyor of whitewater rafting adventures in the Interior of British Columbia. When not writing books about curses and blood magic, she can be found eating burritos, hiking with her boyfriend or cuddling with her cats, Gatsby and Harriet. You can follow her on Twitter @eltheriault.

. . . Compelling and intriguing, showing the many facets of married life, as well as the different ways women can be strong without wielding a sword or an immense power. I would recommend this book to anyone who loves classic fairytales but with a more adult theme with a dash of history.
—The Nerd Daily<br><br>

Rebel Rose breathes new life into a tale as old as time. With prose that invokes the delightful magic of Disney, Theriault weaves an enchanting future for Belle filled to the brim with familiar faces, historical depth, and new challenges. A sparkling debut.
—Rosiee Thor, author of <em>Tarnished Are the Stars</em><br>

Rebel Rose is a masterful blend of fairytale and history. The story and characters we all know and love interlock seamlessly with the real life drama of the French Revolution thanks to Emma Theriault’s deftly confident writing, which will leave you constantly guessing what’s after “Happily Ever After” for our beloved Beauty and her Beast.
—Alwyn Hamilton, <em>New York Times</em> bestselling author of the Rebel of the Sands trilogy<br>

Fairy-tale fans will enjoy the care and depth given to Belle’s character and the touches of magic...A promising start to a new series of fairy-tale continuations grounded in historical events.—Kirkus Reviews

I was delighted by a look into Belle's not so happy ever after against the curtain of the French Revolution. Lush and intricate, Theriault breathes new life into the tale as old as time. This was a rousing call to revolution - and finding the strength to become who you are.
—Victoria Aveyard, #1 <em>New York Times </em>bestselling author of the <em>Red Queen </em>series<br>

If you have ever wondered how Belle and the Beast make it through the French Revolution, Rebel Rose is a necessity. Filled with intrigue, growth, and of course, compassion, Theriault reopens and reimagines a world you will be delighted to be a guest in.
—Rachel Strolle, Glenside Public Library District (Teen Services Coordinator)<br>

Readers will be swept away by this next chapter of Beauty and the Beast, rich in intrigue, rebellion, and romance. Theriault seamlessly weaves history with Disney magic into a tale that will not be easily forgotten.
—Elizabeth Lim, author of <em>Reflection: A Twisted Tale </em>and <em>So This Is Love: A Twisted Tale

Theriault’s writing is perfectly paced and the cast of characters developed with historical realism; fans of the movies will be satisfied by this evolution of a favorite Disney princess...The personal and national stakes of this novel root it in history but also within its backstory as a Disney classic...The French Revolution with a Disney twist, Theriault’s debut is rich in historical detail while answering the long-asked question, “What happens after happily ever after?—School Library Journal<br>

This empowering fable touches on resonant themes of balancing loyalty, duty, love, and sacrifice while navigating through the murky fog of sinister political intrigue.
—SYFY