The Ghost Map: The Story of London's Most Terrifying Epidemic--And How It Changed Science, Cities, and the Modern World (Compact Disc) 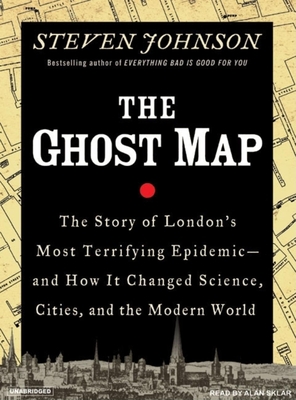 By Steven Johnson, Alan Sklar (Narrated by)
Email or call for price
Out of Print

A thrilling historical account of the worst cholera outbreak in Victorian London-and a brilliant exploration of how Dr. John Snow's solution revolutionized the way we think about disease, cities, science, and the modern world. From the dynamic thinker routinely compared to Malcolm Gladwell, E. O. Wilson, and James Gleick, The Ghost Map is a riveting page-turner with a real-life historical hero that brilliantly illuminates the intertwined histories of the spread of viruses, rise of cities, and the nature of scientific inquiry. These are topics that have long obsessed Steven Johnson, and The Ghost Map is a true triumph of the kind of multidisciplinary thinking for which he's become famous-a book that, like the work of Jared Diamond, presents both vivid history and a powerful and provocative explanation of what it means for the world we live in. The Ghost Map takes place in the summer of 1854. A devastating cholera outbreak seizes London just as it is emerging as a modern city: more than 2 million people packed into a ten-mile circumference, a hub of travel and commerce, teeming with people from all over the world, continually pushing the limits of infrastructure that's outdated as soon as it's updated. Dr. John Snow-whose ideas about contagion had been dismissed by the scientific community-is spurred to intense action when the people in his neighborhood begin dying. With enthralling suspense, Johnson chronicles Snow's day-by-day efforts, as he risks his own life to prove how the epidemic is being spread. When he creates the map that traces the pattern of outbreak back to its source, Dr. Snow didn't just solve the most pressing medical riddle of his time. He ultimately established a precedent for the way modern city-dwellers, city planners, physicians, and public officials think about the spread of disease and the development of the modern urban environment. The Ghost Map is an endlessly compelling and utterly gripping account of that London summer of 1854, from the microbial level to the macrourban-theory level-including, most important, the human level.

Steven Johnson is the national bestselling author of "Everything Bad Is Good For You" and "Emergence: The Connected Lives of Ants, Brains, Cities, and Software," which was named as a finalist for the 2002 Helen Bernstein Award for Excellence in Journalism.

Alan Sklar is the winner of several "AudioFile" Earphones Awards and a multiple finalist for the APA's prestigious Audie Award. Named a Best Voice of 2009 by "AudioFile" magazine, his work has twice earned him a Booklist Editors' Choice Award, a "Publishers Weekly" Listen-Up Award, and Audiobook of the Year by "ForeWord" magazine.