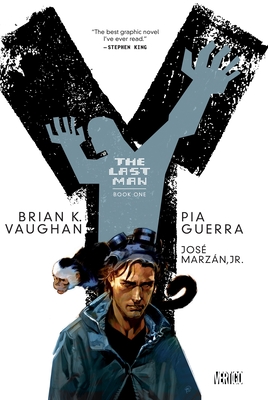 Y: The Last Man, winner of three Eisner Awards and one of the most critically acclaimed, best-selling comic books series of the last decade, is that rare example of a page-turner that is at once humorous, socially relevant and endlessly surprising.

Written by Brian K. Vaughan (Lost, Pride of Baghdad, Ex Machina) and with art by Pia Guerra, this is the saga of Yorick Brown—the only human survivor of a planet-wide plague that instantly kills every mammal possessing a Y chromosome. Accompanied by a mysterious government agent, a brilliant young geneticist and his pet monkey, Ampersand, Yorick travels the world in search of his lost love and the answer to why he's the last man on earth.

Brian K. Vaughan is the Eisner and Harvey Award-Winning co-creator of many critically acclaimed comic books, including Y: The Last Man, Ex Machina, Runaways and The Pride of Baghdad. A professional comics writer since his days as an undergraduate film student at New York University, Brian has written every major DC and Marvel character from Batman to X-Men. He's also written several screenplays, stage plays, and short stories, but mostly, he likes to work on the funny books.

Pia Guerra was born in New Jersey in 1971. Through the 1990s Pia worked on various independent titles including the Bruiser, Sinnamon, Slip, Weird Business, Asylum, and a series of gaming manuals for White Wolf's Masquerade, Changeling and Werewolf lines. In early 2001 Pia began working on Y: The Last Man written by Brian K. Vaughan. Since its release in July of 2002 response to the book has been overwhelmingly positive. Pia won the Shuster Award for Outstanding Canadian Comic Book Artist of 2006 for her work on Y: The Last Man. Pia lives with her husband, writer Ian Boothby (Futurama, Simpsons comics) and three mostly lovable cats August, Charlie and Kinsey.

"Promises to be a compelling series."—Booklist