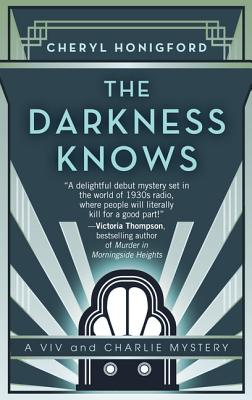 By Cheryl Honigford
Email or call for price
Special Order

Chicago, 1938. Late one night before the ten o'clock show, the body of a prominent radio actress is found in the station's lounge. All the evidence points to murder and one young, up-and-coming radio actress, Vivian Witchell, as the next victim. But Vivian isn't the type to leave her fate in the hands of others she's used to stealing the show. Alongside charming private detective Charlie Haverman, Vivian is thrust into a world of clues and motives, suspects and secrets. And with so much on the line, Vivian finds her detective work doesn't end when the on-air light goes out...

The gripping first novel in a new series from debut author Cheryl Honigford, The Darkness Knows is a thrilling mystery that evokes the drama and scandal of radio stardom in prewar Chicago.