Shooting at the Stars: The Christmas Truce of 1914 (Hardcover) 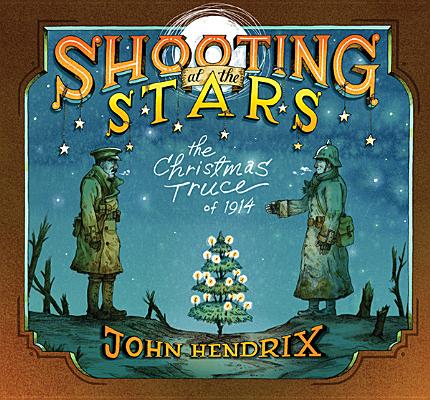 Shooting at the Stars is the moving story of a young British soldier on the front lines during World War I who experiences an unforgettable Christmas Eve. In a letter to his mother, he describes how, despite fierce fighting earlier from both sides, Allied and German soldiers ceased firing that evening and came together on the battlefield to celebrate the holiday. They sang carols, exchanged gifts, and even lit Christmas trees. But as the holiday came to a close, they returned to their separate trenches to await orders for the war to begin again.

Award-wining creator John Hendrix wonderfully brings the story of the Christmas Truce of 1914 to life with his signature style, interweaving detailed illustrations and hand-lettered text. His telling of the story celebrates the humanity that can persist during even the darkest periods of our history.

John Hendrix is a New York Times bestselling author and illustrator. His books include The Faithful Spy: Dietrich Bonhoeffer and the Plot to Kill Hitler, named a Best Book of 2018 by NPR, and Drawing Is Magic: Discovering Yourself in a Sketchbook. His award-winning illustrations have appeared on book jackets and in newspapers and magazines. He is chair of the MFA Illustration and Visual Culture program in the Sam Fox School of Design & Visual Arts at Washington University in St. Louis. Hendrix lives in Webster Groves, Missouri.

"While not shying away from war’s grim realities, the pictures go a long way toward conveying the hopeful light of the German Christmas trees twinkling in the night while the strains of “Stille Nacht” waft across No Man’s Land toward our homesick hero."
— Roger Sutton

STARRED REVIEW
"The acrylic and gouache illustrations tell a tale of their own. Not only is this an impressive Christmas story, but it shows the humanity of warring soldiers."
— Jo Drudge, Educational Reviewer, Rome City, Indiana

STARRED REVIEW
"Few titles at this level convey the futility of World War I as well as this one does. A first choice."
— School Library Journal, starred review

STARRED REVIEW
"Timed with the centenary of World War I but a lesson for always, Hendrix's tale pulls young readers close and shows the human side of war."
— Kirkus Reviews, starred review

"Soldier Charlie is affectionately depicted as a freckle-faced youngster among war-worn older men, and his status as a newcomer to battle lends credibility to the combination of playfulness and awe with which he regards the truce."
— The Bulletin of the Center for Children's Books