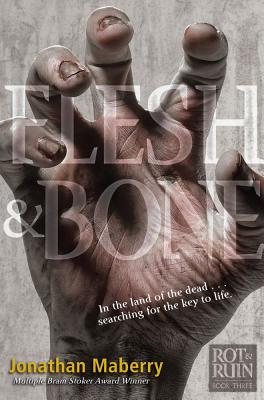 By Jonathan Maberry
$17.99
Call for price

This is book number 3 in the Rot & Ruin series.

The stakes are higher and the zombies are deadlier in this third of an action-packed series that’s “an impressive mix of meaning and mayhem” (Booklist).

Reeling from the devastation of Dust & Decay, Benny Imura and his friends plunge deep into the zombie-infested wastelands of the great Rot & Ruin. Benny, Nix, Lilah, and Chong journey through a fierce wilderness that was once America, searching for the jet they saw in the skies months ago. If that jet exists then humanity itself must have survived…somewhere. Finding it is their best hope for having a future and a life worth living.
But the Ruin is far more dangerous than any of them can imagine. Fierce animals hunt them. They come face to face with a death cult. And then there’s the zombies—swarms of them coming from the east, devouring everything in their paths. And these zoms are different. Faster, smarter, and infinitely more dangerous. Has the zombie plague mutated, or is there something far more sinister behind this new invasion of the living dead?
One thing Benny and his companions can’t afford to forget: In the great Rot & Ruin, everything wants to kill you.

Jonathan Maberry is a New York Times bestselling author, five-time Bram Stoker Award winner, and comic book writer. He writes in multiple genres including suspense, thriller, horror, science fiction, fantasy, and adventure; and he writes for adults, teens, and middle grade. His works include the Joe Ledger thrillers, Glimpse, the Rot & Ruin series, the Dead of Night series, The Wolfman, The X-Files Origins: Devil’s Advocate, Mars One, and many others. Several of his works are in development for film and TV, including V Wars, which is a Netflix original series. He is the editor of high-profile anthologies including the X-Files books, Aliens: Bug Hunt, Out of Tune, Hardboiled Horror, Baker Street Irregulars, Nights of the Living Dead, and others. He lives in Del Mar, California. Visit him at JonathanMaberry.com and on Twitter (@JonathanMaberry) and Facebook.

"The third time’s the charm with even more adventure—and gore—as the series continues."--Kirkus Reviews

"Zombies have run amok in YA lit, but the standard bearer remains Maberry's straight-ahead, action-drama series that began with Rot & Ruin (2010) and Dust & Decay (2011)...Waiting for the full reveal in volume four won't be easy."
— --Booklist