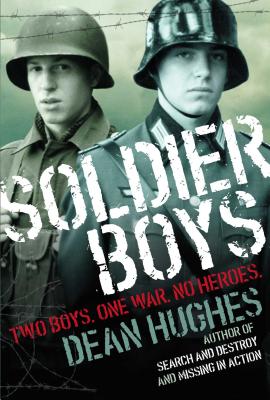 This tense and thought-provoking World War II story, from the acclaimed author of Missing in Action and Search and Destroy, examines what it truly means to be a hero.

Spencer Morgan and Dieter Hedrick are on opposite sides of the war, but they’re fighting for the same things: honor and respect.

At the age of fifteen, Dieter’s blind devotion gets him promoted from Hitler Youth into the German army. Dieter is determined to prove his allegiance and bravery all costs.

Spence, just sixteen, drops out of his Utah high school to begin training as a paratrooper. He’s seen how boys who weren’t much in high school can come home heroes, and Spence wants to prove to his friends and family that he really can be something.

Both Spence and Dieter fear the war will end too soon—that they won’t get the chance to prove themselves. But when they finally see the action they were hoping for, it’s like nothing they ever could have imagined.

Dean Hughes is the author of more than eighty books for young readers, including the popular sports series Angel Park All-Stars, the Scrappers series, the Nutty series, the widely acclaimed companion novels Family Pose and Team Picture, Search and Destroy, and Four-Four-Two. His novel Soldier Boys was selected for the 2001 New York Public Library Books for the Teen Age list. Dean Hughes and his wife, Kathleen, have three children and nine grandchildren. They live in Midway, Utah.

* “Compassionate and tragic…. This book may linger in the reader’s mind for quite some time.”
— The Horn Book, *STARRED REVIEW*

“[A] realistically harrowing depiction of the pointlessness of war.”
— Publishers Weekly