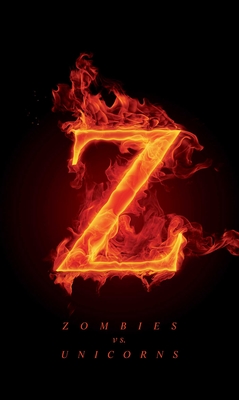 It’s the epic battle of brains against manes. Which side are you on?

It’s a question as old as time itself: which is better, the zombie or the unicorn? This all-original anthology edited by Holly Black (Team Unicorn) and Justine Larbalestier (Team Zombie) makes strong arguments for both sides in the form of spectacular short stories. Half of the stories portray the strengths—for good and evil—of unicorns, and half show the good (and really, really badass) side of zombies. Contributors include many bestselling authors, including Cassandra Clare, Libba Bray, Maureen Johnson, Meg Cabot, Scott Westerfeld, and Margo Lanagan.

This anthology will have everyone asking: Team Zombie or Team Unicorn?

Justine Larbalestier is the author of several teen novels, including LIAR, the MAGIC OR MADNESS trilogy, and HOW TO DITCH YOUR FAIRY.  She was born and raised in Sydney, Australia, and she and her husband, Scott Westerfeld, now split their time between Sydney and New York City. Visit Justine at justinelarbalestier.com.

"Forget vampires vs. werewolves; the hottest feud is between fans of the fiercely magical horses and the shambling, brain-eating undead. . . . Who is the victor in this epic smackdown? Readers, of course!" - Kirkus Reviews

* "In this offbeat anthology, editors Black and Larbalestier embark upon a literary throw-down to determine which is superior: zombies or unicorns. . . . Without a clunker in the bunch, this anthology more than lives up to the potential its concept suggests. Zombies or unicorns? There's no clear winner, unless it's readers." - Publishers Weekly, starred review

"Who ultimately wins? To reuse an old joke: everyone." - Booklist

* "This is a must-have for fantasy collections.” - School Library Journal, starred review