An Unreliable Magic (A Hundred Names for Magic) (Hardcover) 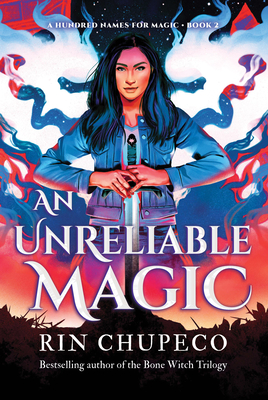 This is book number 2 in the A Hundred Names for Magic series.

This second book in the A Hundred Names for Magic trilogy is not your average fairytale. An unforgettable alternative history fairy-tale series from the author of The Bone Witch about found family, modern day magic, and finding the place you belong.

It's been six months since the lost city of Avalon was thawed and retaken. And Alex is doing his best to be a good leader, even though he's not entirely sure what he's doing. He needs all the help he can get, which is why his best friend, Tala, is by his side. Unfortunately, when the Nameless Sword in the stone appears suddenly in the castle courtyard, it brings a new set of problems. Avalon custom dictates that anyone is free to try to pull it out, attracting people from all walks of life and leaving the kingdom vulnerable to attack.

Attempts to infiltrate Avalon begin in the form of mysterious portals that start appearing without warning bringing nightwalkers, ice maidens, and even a surly dragon.

When the Snow Queen comes out of the woodwork with an unlikely ally and attempts to open a portal to the legendary Buyan, a long-lost country whose life-giving waters could make her even more powerful, Alex, Tala, and their friends will have to work together to stop her, even after their biggest betrayal leaves them broken.

Gripping, fantastical, and delightfully funny, An Unreliable Magic is perfect for readers looking for:

Praise for Wicked As You Wish:

"Combining legends, myths, fairy tales, and classic children's literature from Oz to Neverland, Chupeco (The Bone Witch) creates an enchanting story that is both a feast for the senses and a unique spin on the hero's journey…A nail-biting quest that introduces a gripping new series."—STARRED review, Publishers Weekly

Despite uncanny resemblances to Japanese revenants, Rin Chupeco has always maintained their sense of humor. Raised in Manila, Philippines, they keep four pets: a dog, two birds, and a husband. They’ve been a technical writer and a travel blogger but now make things up for a living. They are the author of The Girl from the Well, The Suffering, The Bone Witch trilogy, and the A Hundred Names for Magic trilogy. Connect with Rin at rinchupeco.com.

"A whirlwind adventure that balances the fantastic with dreams of how real-world problems might be solved." — Kirkus

"A fabulistic alternate history with friendship at its heart, An Unreliable Magic is an enthralling fantasy novel " — Foreword

"Chupeco's second installment in the Hundred Names for Magic series combines the quip-filled vibe of a contemporary teen rom-com, the breadth of an epic fantasy, and the irreverent verve of a punkrock mix tape blaring out of a speeding hot rod" — Booklist