The Inside Battle (Hardcover) 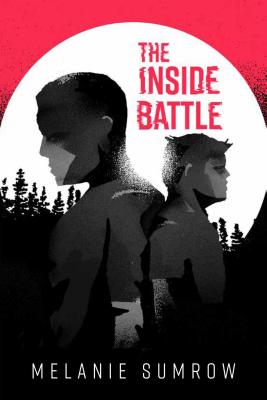 "Powerful in its impact while remaining true to its middle-grade audience, Sumrow's latest is unafraid to fully explore how hate, misplaced anger, and racism can affect the relationship between a boy and his father."--Booklist

Thirteen-year-old Rebel Mercer yearns for his father's approval. His dad suffers from PTSD and spends time in their basement communicating with a racist, anti-government militia group called the Flag Bearers. He doesn't agree with his dad's ideology, but he isn't exactly speaking out against it either. Can Rebel find his voice when it's needed the most?

Thirteen-year-old Rebel Mercer lives in west Texas with his dad, Nathan, and his aunt, Birdie. His dad is finally home after serving in the military, and Rebel longs for his approval. But something isn't right. His dad has PTSD, and lately he has been spending his time communicating with a racist, anti-government militia group called the Flag Bearers. Rebel doesn't agree with his dad's newfound ideas, but he turns a blind eye to them. So when his best friend Ajeet beats Rebel at a robotics tournament by using one of Rebel's pieces, Rebel begins to wonder if there's some truth to what his dad has been saying, and he lashes out at Ajeet.

Expelled from school, Rebel is taken by his dad to the mountains of Oklahoma, where they meet up with the Flag Bearers. Soon his dad is engulfed in the group and its activities, and they're becoming more and more dangerous. When Rebel gets wind of a planned attack on an African American church, he knows that this group has gone too far and innocent people could get hurt. Can Rebel find his voice and stop the Flag Bearers from carrying out their plans before it's too late?

The Inside Battle is a gripping story of family, bravery, and speaking up for what's right from author Melanie Sumrow.

Melanie Sumrow received her undergraduate degree in religious studies and has maintained a longtime interest in studying social issues. Before becoming a writer, she worked as a lawyer for more than sixteen years, with many of her cases involving children and teens. Her first novel, The Prophet Calls, was published in November 2018. Melanie lives in Dallas with her husband, daughter, and one very spoiled dog. Follow her on Twitter and Instagram @melaniesumrow.
melaniesumrow.com

In her thought-provoking sophomore novel for young adults, following The Prophet Calls, Melanie Sumrow takes on a familiar theme--a child trying to balance the desire to respect authority with standing up for what's right--in an unusual setting (in the case of The Inside Battle, from within a white supremacist, anti-government militia camp).

Thirteen-year-old Rebel Mercer wants two things: to make it to regionals in the school robotics competition and to win his father's approval. Unfortunately, the two goals seem to be mutually exclusive. His dad is a Marine, "an actual American hero" who survived five deployments to Iraq and Afghanistan before being sent home with PTSD. Unable to settle into a productive life back in Amarillo, Tex., he has instead been listening to talk radio about the "evils of immigrants" and chatting online with a militia group called the Flag Bearers. He believes he's being cheated out of jobs by non-white people. In a moment of rage after Rebel's best (but secret) friend Ajeet beats him in the robotics competition, Rebel wonders if his father has a point. Rebel makes an impulsive, ruinous choice and in almost no time is driving into the mountains with his father, in search of the Flag Bearers compound.

Sumrow takes on an incredibly fraught subject with care and restraint, remaining firmly within Rebel's point of view as a young teen who desperately longs for his macho father's approval even as he wages an internal battle against his racist indoctrination. His transformation from a boy who believes he has no authority over his own life to a young man who ultimately rebels against flagrant immorality is both believable and inspiring. Entering Rebel's world will likely be an eye-opening, disturbing but rewarding experience for young readers.
— Shelf Awareness, STARRED REVIEW

Powerful in its impact while remaining true to its middle-grade audience, Sumrow's latest is unafraid to
fully explore how hate, misplaced anger, and racism can affect the relationship between a boy and his
father. Rebel attempts to navigate his father's mercurial moods, caused by untreated PTSD after returning
home from a stint in the military, through avoidance and focusing on robotics. After a tough loss to his
best friend Ajeet during a competition, Rebel turns his resentment outward and commits an appalling,
hateful act of vandalism. In response, Rebel's father takes him to a training camp for a racist paramilitary
group. While the group plans acts of violence against minorities and the government, Rebel tries to decide
if saving his father-and siding with the extremists-is worth the loss of his friendships and convictions.
A somewhat too-convenient twist moves the story toward a conclusion free of explicit violence that does
not downplay the consequences of each character's actions. The author's note also provides important
conversation starters about bigotry, PTSD, and using one's voice as a tool for justice.
— Booklist