Hang the Moon: A Novel (Hardcover) 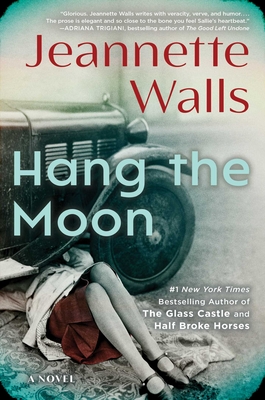 Named a Most Anticipated Book of 2023 by LitHub!

From Jeannette Walls, the #1 New York Times bestselling author of The Glass Castle, comes a riveting new novel about an indomitable young woman in Virginia during Prohibition.

Most folk thought Sallie Kincaid was a nobody who’d amount to nothing. Sallie had other plans.

Sallie Kincaid is the daughter of the biggest man in a small town, the charismatic Duke Kincaid. Born at the turn of the 20th century into a life of comfort and privilege, Sallie remembers little about her mother who died in a violent argument with the Duke. By the time she is just eight years old, the Duke has remarried and had a son, Eddie. While Sallie is her father’s daughter, sharp-witted and resourceful, Eddie is his mother’s son, timid and cerebral. When Sallie tries to teach young Eddie to be more like their father, her daredevil coaching leads to an accident, and Sallie is cast out.

Nine years later, she returns, determined to reclaim her place in the family. That’s a lot more complicated than Sallie expected, and she enters a world of conflict and lawlessness. Sallie confronts the secrets and scandals that hide in the shadows of the Big House, navigates the factions in the family and town, and finally comes into her own as a bold, sometimes reckless bootlegger.

You will fall in love with Sallie Kincaid, a feisty and fearless, terrified and damaged young woman who refuses to be corralled.

Jeannette Walls graduated from Barnard College and was a journalist in New York. Her memoir, The Glass Castle, has been a New York Times bestseller for more than eight years. She is also the author of the instant New York Times bestsellers The Silver Star and Half Broke Horses, which was named one of the ten best books of 2009 by the editors of The New York Times Book Review. Walls lives in rural Virginia with her husband, the writer John Taylor.

Praise for Hang the Moon

“Jeannette Walls is a force to be reckoned with… She has indisputably positioned herself as a writer of great worth, and any work of hers is one to be appreciated.” —Julia Hass, LitHub

"Jeannette Walls created my new favorite hero in her protagonist, Sallie Kincaid. Sallie is sharp, bold, unflinching, and humorous despite, or maybe because of, her hardships." —Jennette McCurdy, #1 bestselling author of I’m Glad My Mom Died

"Hang the Moon is Jeannette Walls' masterwork. Young Sallie Kincaid is clever and quick, she's her father's courageous daughter and her mother's vulnerable lost child. Walls writes the people of the mountains of Virginia in their complexities, tangled family bonds and explosive romantic relationships with veracity, verve and humor. Epic in scope, the novel is a thrill ride through Prohibition and change in the American south, where hucksters and opportunists, fallen women and upright moralists kept their secrets to the grave. The prose is elegant and so close to the bone you feel Sallie's heartbeat. Glorious." —Adriana Trigiani, bestselling author of The Good Left Undone

Praise for Half Broke Horses

“Jeannette Walls . . . once again proves that the combination of gifted storyteller with great stories is both rare and intoxicating."
—Janet Okoben, The Cleveland Plain Dealer

“[An] eloquent tribute to a pragmatic heroine . . . A powerhouse—fast-moving, fearless and impossible to forget.”
—Michelle Green, People

“[Jeannette Walls is] the third generation of a line of indomitable women whose paths she has inscribed on the permanent record, enriching the common legend of our American past.”
—Liesl Schillinger, New York Times Book Review